A four day week and the garden of England 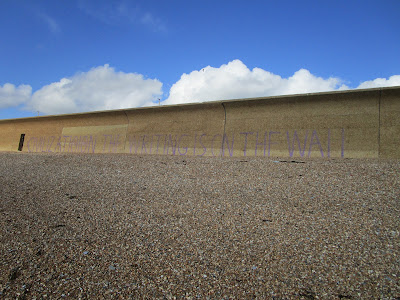 In 1986, after a morally challenging weekend at work when I was briefed to ask a pop star's wife if she'd had an abortion or a miscarriage, I handed in my notice. I had no job to go to. I also decided I'd never work a five day week again. I was 31, I worked hard and wasn't paid extra for my productivity.

My decision was emotional and unnegotiable. And after seven or more years I wanted to control my own time. I've been self-employed, with bouts of part-time PAYE work, ever since. That's 35 years now.

I had to turn off the radio this morning when one of the old-style productivity is all 'management consultants' went off on one about how Unilever's experiment of a four day week was all a terrible idea and there was no proof it would benefit companies at all.

Leave the room, old men, if you can't cope with people living differently. Your kind of old style thinking is what's turned Kent, the garden of England, into a lorry park and open-air toilet. It's enabled property speculation and endless crime disguised as progress. Time for scepticism about your ability to tell us what to do. Time to think.

Posted by Jackie Wills at 11:29 am No comments:

Understanding the vocabulary of power 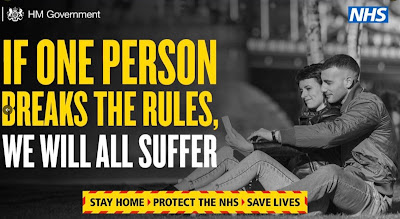 The darkness made it seem later than it really was and there was nothing left on iPlayer so I started Industry. As I binge watched I realised it was Wolf of Wall Street with more noughties emotional sass.  The decadence Martin Amis has portrayed far more graphically in his 1984 novel.

I think I might write letters to these people. But what would I ask them? Why me and my friends don't sit around tables discussing pooled funds? How far away we are from powering the planet? Is my alienation age-related? Is it class? Is it education?

"So the superrich do indeed seem to be moving further and further away from the rest of society."

This sentence ends a 2020 report by global insurance and asset management company, Allianz. A few years back Oxfam used Credit Suisse's annual global wealth report to show what the world's rich are worth. This year's contains a similar pyramid: 1% of the adult population – accounts for 43.4% of global net worth at the end of 2019. A couple of years ago Dominic Frisby predicted by 2030, 1% will own two thirds of global wealth. The Credit Suisse report this year identifies industries with most billionaires: 1. finance and investment 2. tech 3. fashion and retail 4. real estate and 5. food and drink.

But we're still not talking about money - what we earn, how we earn it and what being at the level of hedge funds and three figure (or more) income actually means. The vocabulary of power is ring fenced by those who do understand it. If I really understood how big money was made, what it takes to trade x for y, make that phone and sell it at that price, make, transport and sell a beaded dress....why property developers are making money on government grants, why the UK funded a buy one get one free meal deal during a pandemic. If I was properly financially and economically literate, would that shift to 1% owning 66% still be the next decade's safest bet?

The ad campaign above became meaningless when a rich boy went for a drive up the M1 and bumbled around Cumbria in his Land Rover. We still joke about it. He got off. Who can teach me what I need to understand Gates, Ortega, Buffett, Helu, Bezos, Zuckerberg, Ellison and Bloomberg and their trajectories? Their place in the world compared to mine.

Posted by Jackie Wills at 12:45 pm No comments: 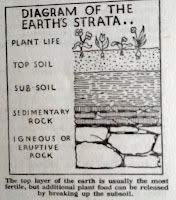 Most old gardening books have a section on soil. Gardeners know they must know the soil, what grows best, what not to bother with, how to keep it healthy.
I'd be willing to bet that knowledge of the soil was once far more widespread among people relying on being able to eat what they grow.
In the FAQs of the British Society of Soil Science is the humbling fact that soil is responsible for 90% of what we eat.
As a late contribution to World Soil Day, the title poem from my recent collection, A Friable Earth (Arc Publications 2019), came from thinking about looking after the earth, the old Sussex words for mud, and ageing. 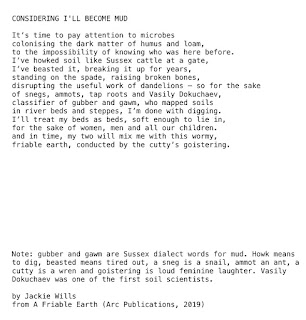 Posted by Jackie Wills at 12:16 pm No comments:

One I found earlier 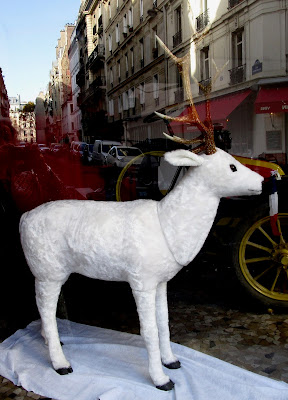 I took this in Paris when I was there for Paris Photo. It was pre-pandemic. The stag, although a model, feels like freedom.
Posted by Jackie Wills at 12:29 pm No comments: