It seems a long time away, but in May this year there'll be an event in Brighton bringing together filmed poems based on the theme, Place of Birth. It's part of the Festival Fringe.

Here's the poem I was commissioned to write. And below it, I've included notes I wrote for the animator, Mark Collington, explaining some of the imagery. His animation is a homage to Aubrey Beardsley and adds enormously to the poem. I've always loved Beardsley's work and Mark's an expert on his life. The animation explores Beardsley's fine style, as well as his fascination with the alphabet.

In Alphabetic, I wanted to explore myths about birth as well as the idea of the foundling. A starting point was Oscar Wilde's Importance of Being Earnest with its famous Lady Bracknell scene. The poem is written in a nursery rhyme style because I took the alphabet as a starting point, anticipating adult readers or listeners will refer back to his or her experience reading aloud to children, or being read to.

Alphabetic
(the A to Z of birth)

Here’s baby A, swaddled in a bin-liner
dressed in a sweatshirt his mother wore,
bouncy B’s exit was recorded on camera,
her head clamped in the beak of a stork.

Clever mite C dropped from an ambulance
in the hospital car-park, name on a tag,
and D’s the famous embarrassment
left at Victoria station, in a handbag.

E is the bundle a postman delivered,
F, bought from an Argos catalogue,
this little girl, G, was made in a factory
and H reared by rabbits, found by a dog.

Brothers I and J emerged from a toilet,
and cheeky K arrived with the chips.
L was grown on daddy’s allotment -
as you can see from the soil on her lips.

Look at M, the cat brought him home,
N, fat slug, and her gooseberry bush...
O, a surprise, was delivered by aliens
and P raised from clay by Prometheus.

Now, Q, the original test-tube baby...
R, a beauty, is cloned from her mum.
Watch out for S, born on a ski-slope,
and mythical T, the size of a thumb.

An addict, already, U screams for crack,
V is damned by original sin.
W’s winched from floods in Mozambique
and X is cut from the guts of her twin.

That’s twenty-four, just two more to come.
Out of the waves, swims foam baby, Y.
Arms raised, she leads to the very last one -
Z, a star made of darkness in a distant sky.

Notes to Mark, the animator on the creation of Alphabetic:

A is the archetypal foundling, accompanied by a memento of his mother, B represents the idea of the child delivered by a stork (the beak refers to a forceps birth), C introduces the concept of a new birth myth told to curious children by parents or grandparents who don’t want to deal with the facts of life and D is the reference to the Importance of Being Earnest by Oscar Wilde and Lady Bracknell’s famous phrase ‘a handbag?’ E, F and G are more modern birth myths - there seem to be an awful lot around. H is a reference to the idea of a wild child (Tarzan, Romulus and Remus etc. etc) reared by animals after being abandoned or lost by parents. I & J are a reference to the idea of a teenage mother hiding pregnancy and giving birth alone, K is another birth myth. L has shades of a creation myth - in many stories, the original people come from the earth. M refers to that phrase, look what the cat dragged in, so I suppose it comes out of the idea of self-esteem, N and the gooseberry bush is another classic myth, but fat slug is a phrase a lot of people seem to use about newborn babies - I did - it’s affectionate, though. O the surprise is obvious but there are these bizarre stories from the American mid-west about people being abducted by aliens and being made pregnant...P and Prometheus - in Greek mythology, he created the first people from clay. Q refers to that question why can’t I get pregnant? As well as the questions about fertility and ethics. R a beauty brings in the issues about cloning and why it would be done if it ever happens widely. S is the idea of the action mother (supermum?) and T refers to the story of Thumbelina, who slept in a walnut shell and was a gift to a woman who couldn’t have children. U as a crack baby - I think it was the sound I tuned into here (you - the other, distanced, nameless baby) and V is the shape of the snake’s tongue who tempted Eve into sinning (original sin). W is the baby who was born in a tree in Mozambique during the 99/2000 floods - I thought of the branches of the tree being rather like the shape of the letter. X refers to the possible shape of a scar and this came from a story I read about a baby being cut out of the body of a 7 year old, an unseparated twin. Y is Athene, the goddess of love who was born from the foam of the waves and Z - Zeus, god of the sky as well as the end....space, the unknown, the mystery of where we come from, the idea that we are stars before we are born, we have time on earth and go back to being a star after we die.
Posted by Jackie Wills at 9:37 am No comments:

A picture from Aldeburgh November 2005. 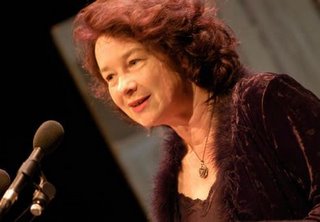 Posted by Jackie Wills at 10:19 am No comments: