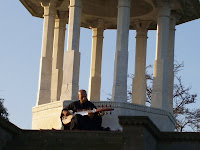 Towards the end of a glorious Sunday I walked with my daughter to the Chattri on the Downs for the opening of the Brighton Sacred Music festival. The event, based on ritual, was conceived by a performing arts duo called Red Earth. All of us who'd made the short trek from a road off the A27, just a mile over the fields, took part in what my daughter called 'a slice of Doris'.

It was so perfectly Brighton, but the best of Brighton - a gentle, quiet, spiritual hour or so with incense, cymbals and temple bells with white flags blowing and shadows stretching. My neighbours, Clare and Pete found it on a walk with their dog, Nyati was there - she'd reminded me about it - Razia was there because she's one of the organisers...

The last time I went to the Chattri was an afternoon scramble with poet Maria Jastrzebska and Atlas literary magazine editor Sudeep Sen, who was in Brighton for a poetry festival. That visit coincided with the opening of the shooting season - guns lined up along the hills in the distance, shots rocked the valley and we watched the beaters' progress nervously. Added to that, the fields were full of jumpy cows with late calves.

The Chattri means umbrella in Hindi, Punjabi and Urdu. Built from marble and granite, it's where 53 Hindu and Sikh soldiers were cremated during the first world war. Their ashes were then scattered in the sea.

On the monument, in Hindi and English there's this inscription: 'To the memory of all the Indian soldiers who gave their lives for their King-Emperor in the Great War, this monument, erected on the site of the funeral pyre where the Hindus and Sikhs who died in hospital at Brighton, passed throught the fire, is in grateful admiration and brotherly affection dedicated.'

Around 12,000 Indian soldiers, wounded on the Western Front, were hospitalised around Brighton, some in the Royal Pavilion.

There's a free event each afternoon at 5 pm all week - each one a ritual opening up of north, south, east and west points. Razia will be there on Tuesday to open up the east. 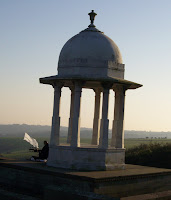 http://www.worldsacredmusic.org
Razia Aziz Between Heaven and Earth: songs of love and devotion from India and Pakistan.
http://www.chattri.com
Posted by Jackie Wills at 8:35 am No comments: