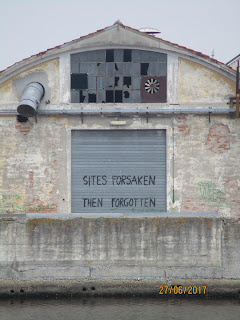 The bells are ringing on Lewes Road for Sunday mass and when I opened the curtains at 7.30 the sky was clear. The first thing I did, before feeding the cat even, was to print out an early draft of a new collection, make coffee, fruit salad, go back to bed and read it.

When Jane Fordham and I were in Ravenna recently, two things in particular struck us both - one was the natural paradise captured in stunning Byzantine mosaics we were seeing every day, the other was that whenever we were at a loss, we ended up on bikes at the old port. Cycling along the empty canal road, past abandoned warehouses and allotments tucked away on reclaimed plots felt like a walk on the Downs.

Since coming back from Italy I've been struggling with a way back into drafting the prose book on South Africa and doubting the place of the poems I've been writing over the past four years. 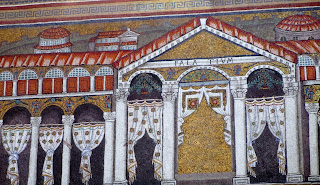 In Bologna and Ravenna, I set myself the challenge of reading Clive James' translation of Dante's Comedia. Actually, Inferno was a romp -no trouble at all reading this. James' translation is accessible, energetic and very easy to get through. I gave Purgatory a miss and went straight to Heaven, which, frankly (and nothing to do with James) is boring.

But what also came up as Jane and I were discussing the glory of mosaics - and she's an expert - was the brilliance of the colour, the birds, flowers and overall, a sense of joy that comes from these centuries-old images. 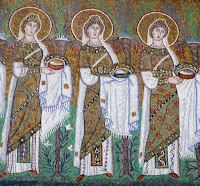 Unlike Torcello's black mosaics with their vision of hell, Dante's explicit, violent revenge on his enemies, these Byzantine masterpieces celebrate how fabrics fall, celebrate pattern, gesture, greenery to such an extent that you can feel the breeze through the curtains, hear the women's feet on the marble floors and the sheep calling in the rocky hills. Small gold tiles were the solution to taking unwanted people out of the frame - walls of gold, in fact.

And the religious message, while present, never felt intrusive. Perhaps this is what links the basilicas of Ravenna with its old port - room to think and wander.  No-one hurried us as Jane drew, took pictures and looked.  The occasional coach party or group of kids came and listened to a guide explain it all, and went. Then we were virtually alone with these Byzantine mosaic makers again, Jane laughing at where someone had run out of a shade of blue and bodged it, or questioning a disembodied hand at some curtains. 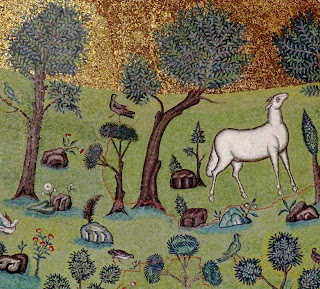 I wrote every day but not with purpose and that was fine, I wanted to allow things to emerge, not sure anything would. And when we got back it was frantic. Giya's graduation in Cardiff, Airbnb guests, house cleaning, the bathroom ceiling to re-paint, the allotment and finding ways of using courgettes. I planted far too many. The raspberries had started, blackcurrants needed picking and I wanted to get hold of some mirabelles before professional scrumpers stripped the trees up at the racecourse. 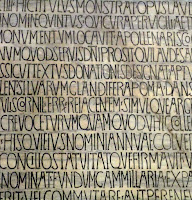 Then I looked at my notebook and found a couple of poems. I put them into lines, I felt like taking risks, I left lines in I might have cut, even weeks ago. But I returned to doubt, the weight of everything that's being published, that's been published, that is about to be published, to the weight of that question, whether it's worth anything.

I had a workshop to do and stared out of train windows for the two four-hour journeys, there and back. I filled and emptied the washing machine endlessly. I took one of the poems to a group I belong to in Brighton. And an off-hand comment about my prose book to poet Robert Hamberger resulted in him reminding me of those female titans, Austen, Rich and Woolf and how they fought silence. Another Brighton poet, John McCullough posted a quote from Hart Crane on Facebook about the importance of waiting till instinct assured him everything was assembled as it should be. My friend, the fabulous poet Moniza Alvi talked me through doubt on the phone, Rachel Rooney and Allie Rogers at lunch yesterday came up with strategies. 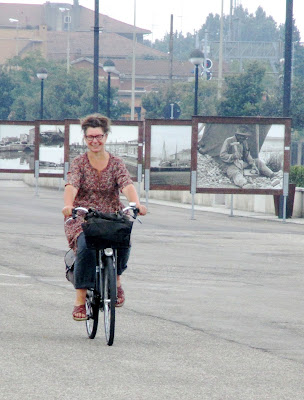 Friendship has broken me through the doubt and if that sounds sentimental, I'm not bothered anymore. The old man behind Jane in this picture is breaking rocks for the road we cycled on. His life was harder than mine will ever be. But I'll guarantee that when he filled his water bottle, it was with friends and when he staggered back to sleep, knackered, he was going over the day with friends.

Can I thank them enough?