A hand reaching out of the sky 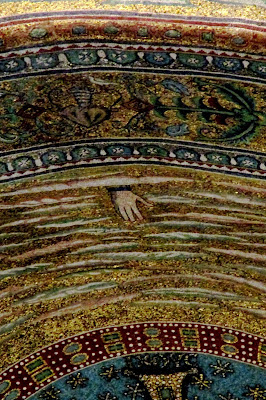 My daughter emailed to ask for a list of Black poets for a course mate and yes, I had some solid suggestions, but to make sure I hadn't forgotten anyone crucial, I did a google search.

Was it the time of day, was it a freak accident? What indeed happened for Google to place, at the top of my results, a blouse (black) with 'poets' sleeves' or a black sofa which a company has awarded the name 'poet'?

The world's four most valuable brands sit in our hands - Apple, Google, Microsoft and Facebook. Google's owner has claimed the word, Alphabet and Apple the fruit of late summer and autumn (and, for some, paradise). Facebook has claimed our hands themselves.

And so I look to the hand coming out of the clouds. When I saw it in Ravenna I thought it was in the sea, not waving but drowning, to quote a fabulous English poet. Now I know, thanks to Jane Fordham, it's coming out of the sky and it's about to give a thumbs up.

Not the blue thumbs up of a like but a thumbs up to fear. Yes, I confess to posting pics of a new haircut and other pointless information, like this outside a pub on Lewes Road. And so time gushes away. 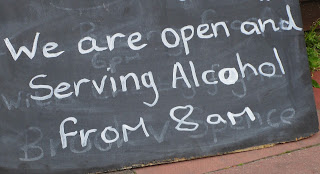 Is the hand that prefers to swipe and like, rather than dig and harvest to blame for the insects disappearing - hoverflies, wasps, house flies, beetles - and with them larks, swallows, swifts?

And is the hand coming out of the clouds the one to help me (and you) up onto the roof for a better view?

Posted by Jackie Wills at 11:17 am No comments:

A landscape before the US invaded

"The great and almost only comfort about being a woman is that one can always pretend to be more stupid than one is and no-one is surprised." Freya Stark quoted in The New Yorker.

I thought I was immune to brainwashing because I'm a writer. And it may be that I am more tuned into how language is manipulated, jargon introduced as normal, how spin is engineered to be invisible. But in the early hours of the morning, during a rare night of insomnia, a travel memoir published in 1970 reminded me again how quickly images attach themselves to words, how quickly one view is replaced by another.

I was deep into Freya Stark's book, The Minaret of Djam - her account of an unorthodox journey to an isolated 12th century structure in a wild province of Afghanistan - and it's thrilling, in places beautiful, often thought provoking. She was in her mid 70s when she made this incredibly demanding trip and she allows herself the freedom of comment that comes with age. It is very easy to be with her, even though I am never likely to be so adventurous.

I so rarely suffer from insomnia that when I do it doesn't bother me - I decide to sleep during the day and enjoy the sounds of foxes outside.  So I keep going and am near the end of the book when I come across her description of "the wide pasture lands and climbing skylines of Helmand...." and in the last pages of the book, what she sees on the road towards Kabul and Kandahar.

"Caravans of firewood, and cows in long lines returning, moved beside us along a far-stretched avenue of pines; they were making for the city in the dusk."

Helmand and Kandahar have never before been places of pasture and bazaars selling fine white shirts, in my mind. They are inextricably fused to helicopters and patrolling troops, drones and ambushes. And the next morning, I was so ridiculously grateful to Stark for this early hours revelation that I couldn't stop reading extracts to Mrisi. Listen to this, and this, and this.

I didn't set out to challenge my preconceptions about Afghanistan. Stark ambushed me, in the best possible way. And I am grateful for that experience, for the insomnia. I wonder, if I hadn't been so alone in the early hours, with just the foxes playing outside, if I'd have realised, with such force, the fragility of language.

What makes a biosphere?

On my way to the allotment gate this morning a woman stopped me with a petition. Will I sign it - the council's changing the school catchment areas. Kids from the street I live in will have to travel beyond the next suburb and further east, almost into Kipling's former home of Rottingdean to get to school. Kids won't be able to walk to school or back home in winter because most of the way the road's isolated and unsafe. The bus service isn't bad, but how many parents will opt for driving their kids to school? More cars on the road....

Is it fair to suggest Brighton's problems are self-inflicted? And what turned it, despite those of us who moved here for its oddness, into a city obsessed with appearance, shopping and weekend tourism? While lending developers money to build the i-sore, the council allowed the rest of the seafront to decay, subside and erode. Far too late a campaign is trying to preserve the beautiful Madeira terraces which the council would probably rather demolish with the excuse they're too expensive to repair - an excuse you'd expect from a shark-developer but not a council with such a unique heritage. There used to be a 1930s saltwater outdoor pool near the marina. It was demolished. Now someone wants to build a new one.

When bankers were given bonuses for crimes against the rest of us, Londoners were buying houses off Elm Grove over the phone. The council allowed family homes to be turned into eight and nine bedrooms and let by shark-landlords. The enviable crescent of council houses opposite Brighton university on Lewes Road is now almost exclusively student housing - privately rented. Landlords make £700 a month for each room, often let individually rather than as a share because there's more money that way. So by 2014, Brighton had become the fourth most unaffordable place to live in the UK - house prices rose 42% in just seven years since 2007.

I stand chatting to the woman and her small daughter who may have to go to a school stranded between an out of town suburb and a village that has nothing in common with Brighton other than a coast road.

I wander down the path and pick tomatoes, green chilli peppers, chard and squash. I find a bag of apples an allotment neighbour has left me.

The allotment's been giving all summer, the freezers are both full, I've used up most of the jam jars. I've dried herbs and made raspberry flavoured vodka. This has been a fantastic year for growing most things. Garlic's not been brilliant, but I grew cucumbers. In a damp couple of weeks the slugs ate all my new lettuce seedlings but up until then I'd had salad until it bolted.

None of this has anything to do with the woman and her petition other than where I was when I signed it. Except it does, because this year I have started to be afraid for allotments. My fear is like a secret I don't want to share. It began with a Green council that did nothing with the unique opportunity it was given by the electorate. It continued with Labour councillors who betrayed socialism.

So I worry that a commitment to ordinary people isn't part of our local politicians' thinking anymore and that they have been seduced by retail, stag and hens, bar and coffee culture, by landlords and that word economy which they pretend helps locals but in reality means our kids have to move back home or to Worthing and beyond. I worry that individuals growing food (despite Jeremy's passion for his allotment) doesn't feature as strongly in Brighton's credentials as a World Biosphere Region, as a private company promoting expensive green roofs. I worry when the council implies it is encouraging children to walk or cycle to school and in fact it is doing the opposite. How else will it shaft us?
Posted by Jackie Wills at 8:32 pm