The goddesses of sewing

The earliest bone needle, estimated at 61,000 years old, was found in a South African cave, not far from Durban. I know this because I've been trying to find anything about the history of sewing in the country. Why? I came across this photo of young women and girls in Elim, Limpopo, a place we passed through each time we went north from Johannesburg to visit Risenga's family. The sadness of this photo hit me. I had to know more. 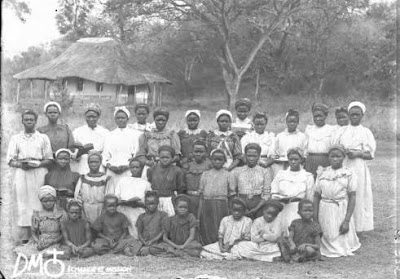 It was 1896 and the days of colonialism, European so-called values and so on. You know the story. I barely know South Africa but I remember being struck by the skill of women there when it comes to making. Crochet, bead work, embroidery, hand-sewing, anything....In fact, one of my proudest moments may be when an elderly woman asked me where I'd bought a small beaded bag I was carrying. I told her I'd made it - out of the leg of a pair of Mrisi's trousers, embellished with beads I'd taken with me in case I was bored.

There are goddesses of sewing the world over, but I want to read the history of sewing from that early needle discovered in the Sidubu settlement (where, incidentally, archaeologists reckon they've found the first beds). Here are some of the people who can truly lay claim to the art of sewing, living in the country where the first garments were stitched together. Let's wonder again, at who writes history and who's left out.

Posted by Jackie Wills at 5:27 pm No comments:

Clearing out and re-arranging 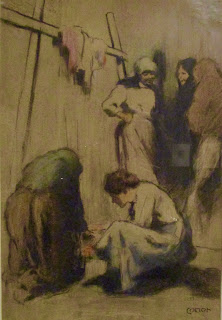 I have a box of leads in the hall and a pile of books. A bag of clothes on a bed and a bag of duvet covers. I have invented a use for scraps of fabric.

I have re-organised empty jars, my cookery books and spices.

The mental re-arranging's next. This year's accounts. Deciding what I mean by clearing out. Do I burn all I've started and not finished?

Have a bonfire of bureaucracy on the allotment? The accounts are always a thing that linger somewhere in my gut until they're done.

This print is Inside the Clothes Market, by William Connor.

Posted by Jackie Wills at 10:27 am No comments: 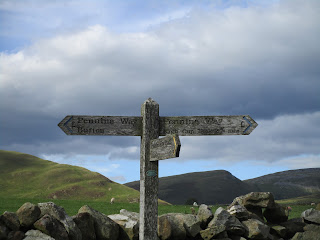 Our first family holiday in years with all of us, apart from Mum, was over bank holiday weekend. We all wanted to spend time together before Giya left for the Netherlands, for good.

So we drove for hours up the M1 to Cumbria, cursing at signs for Barnard Castle, notorious now as the place where a government advisor tested his eyesight during lockdown.

We had managed to book a week at Dufton youth hostel. I've been a member of the YHA for years and got an email about exclusive hire. It worked out cheaper for all of us than a cottage in the south of England. Well, a cottage anywhere. I won't go on about lockdown profiteering...

We walked every day, bar one. We chatted. I prepared myself, I thought, for an empty house again. This is the third time. Every morning I wake up I think, oh yes, it's just me. It's the habit of 28 years of motherhood. Listening for the other breath in the house.

We brought home, I think, an appreciation of silence. We saw red deer, buzzards, a red squirrel (well, Giya did), two hedgehogs and many beautiful sheep and cattle. Oh, and horses outside the pub. No surprise there, we were so close to Appleby.

When the children were little, we often went to empty, wild places. In the kitchen I have two horseshoes that a farrier gave the children in Wales, at the end of a long walk in the hills. We have porcupine quills from Risenga's land in South Africa. The silence was good. The company was good. We ate well.

Posted by Jackie Wills at 8:34 am No comments: 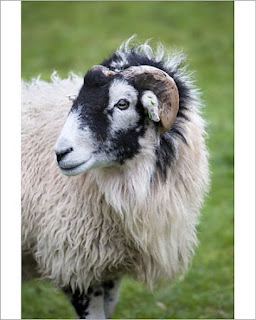 It reminded me of transhumance, the centuries-old tradition of moving sheep and cattle from the high pastures of summer to lower, safer ones for winter. We were at the end of a walk back to Dufton in which we missed a footpath, found a hen who'd escaped the battery farm and carried it to a safer, free-range home.

After the chicken, we passed a shed of cows who should have been in the fields. We passed fields of bullocks who wanted to play. We heard dogs howling in kennels as we ate our lunch in a thick wood. And as we went deeper through the wood, we saw pheasant cages. The dog send them flying upwards. We gathered up feathers. I remembered working on a pheasant farm in Brittany when I was 17.

We were back on a road we'd walked at the start of the week when a woman, possibly my age, flew out of a farm track on a quad bike, the sheepdog balancing on the back. Behind her was a flock of sheep. She asked us to stay back, not to alarm them. More walkers came down the road. The sheep filled the track turned right and through the gate we'd just left.

We hung back when the track emptied. The other walkers pushed on, led by a man in red knee high socks. It was hot, we were dawdling in the wake of such excitement, such a mass of creatures in a rush. The farmer had mentioned the green lane we needed to take and we were on it when we saw two men on quad bikes at another gate in the distance. The first sheep straggled through. We pulled ourselves up the bank, holding onto the dog, as this second flock rushed past, skittery, unnerved by us watching.

The hills were emptying of all the creamy dots that weren't rocks. Some of the second flock were lame, some very young, many had curled horns. This flock seemed endless, one after the other rushing past the stone wall opposite us, the dog whimpering, straining to be free and with them. There was one left that wouldn't be persuaded to follow. Neither the sheepdogs nor the men on quad bikes could shift it. We passed it squeezed up against the wall, its head into the stone. At the end of the fields we were on the road up to High Cup Nick, a box of drinks and crisps on the kerb with an honesty box. We sat and opened the flasks. Then noticed bikes up on one of the hillsides, rounding up more.

A woman came out of the house and we asked what was going on. They were separating the young rams from the flock. They'd be lamb chops, she joked, adding quickly that she wouldn't be eating them. Then the ewes would go back to the hills. So it wasn't the same as transhumance but it had the same power. The hill farmers had chosen the day of our walk because the weather was fine. They did this once a year. And I remembered helping with the same separating of mothers and sons when I was in Mallorca. That was when the ewes got away, left for the woods and called for two days. For now they were together, although small batches of rams were already being driven down the road in a trailer. 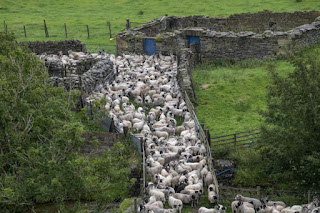 Who can think of that? The industrial scale of slaughter. The chickens kept in darkness. Pigs transported in lorries on crowded motorways. It used to be different. It doesn't match up, what we are doing.

We followed this last flock down the road with other walkers as they flowed into one field, carried on into the village, were guided into another. These flocks had given us something, shed an element of the hills as they ran past the walls into lush fields. But I'm still trying to work out what it was.

Photo from The Scottish Farmer by Wayne Hutchinson

Posted by Jackie Wills at 10:31 am No comments: