"......categories like black writer, woman writer and Latin American writer aren't marginal anymore. We have to acknowledge that the thing we call literature is more pluralistic now, just as society ought to be. The melting pot never worked. We ought to be able to accept on equal terms everybody from the Hasidim to Walter Lippmann, from the Rastafarians to Ralph Bunche." Toni Morrison.

Whenever I go to a poetry festival this is the question I revisit. I'm just back from King's Lynn, where the programme was indeed broad both in terms of the styles of the writers participating, their personal aesthetics and their backgrounds. But I've been troubled for a very long time about the notion of who defines writing quality and how it's assessed - and this is another reason for flagging up Morrison's quote.

One term of abuse, for example, the easy dismissal, that irritates me is domesticity. It's used by both sides. The traditionalists, defining what is a good subject for poetry, twist and turn between rewriting the classics, working class roots, playing with the ideas of dead philosophers...dealing in traditional form, irony and cleverness. For the avant garde, any hint of the personal and by implication the domestic, suggests the dead hand of the everyday and dullness.

Few of these intellectuals defining our poetry and its qualities would dare disagree with Morrison's view. Yet when there's an opportunity to listen to work they are unfamiliar with, that is written outside their narrow boundaries - an opportunity presented to them effortlessly, on a china plate even, with cake and tea, do they take it?

Adel Guemar's State of Emergency, Lorna Thorpe's A Ghost in my House, Paul Stubbs' The Icon Maker and Will Stone's Glaciation were four of those opportunities at Kings Lynn. All of them are poets writing outside the expected. You'd probably rather not listen to Guemar's delicately sinister poems borne of Algerian torture and oppression. They reminded me of the attention to detail in Leon Golub's paintings, the gold watch on the wrist of the executioner.

And you might grimace uncomfortably at Lorna Thorpe's uninhibited poems of the body, charting that unknown place between men and women. Paul Stubbs, taking as his starting point the paintings of Francis Bacon, is signalling his intention to unsettle and as he delivers, the crow on the roof joins in. Then there's Will Stone's melancholy, the quiet exploration of that state of mind that is so taboo to those in bed with irony....

I believe the more people who write, publish and offer up their wares, the better. How can there be too much poetry? Those who fear it are those who fear exposure, who fear their views on what is good and bad will be overturned.

Those who cannot listen to the new are dead. If there is a formula for a healthy mind, I'd say a regular blast of whatever you define as the classics and a brisk daily walk through the margins with whoever invites you.

Personally, I'd rather risk wandering through the graveyard slot and be reminded of what unites us all than sleep through the afternoon.

And as a postscript, I want to read poetry that comes from somewhere deeper than esoteric footnotes, I want poetry to be loving, sexy, angry, jealous and passionate, not preening and self-conscious. Give me Neruda, Lorca, Plath, Edna St Vincent Millay at her best.....those who follow in the tradition of the old ghazals describing midnight and all it contains.
Posted by Jackie Wills at 8:57 am No comments:

I've been writing about a forest the way I normally write about the sea. I thought writing had left me but I'd started a piece before the summer holidays and woke up one morning understanding how I could go back to it. I cannibalised other poems, bits from my notebook and shaped what I'd already written. I felt as if I was hammering metal.

It's a piece based on 20 prints by Jane Fordham, whose work is on the cover of Commandments. Jane showed me the prints, I wrote and showed her some words, changed them and then Jane decided on an order for her images, I wrote again and finally decided I needed an underlying narrative, but not an obvious one, that would bind 20 self-contained three line poems.

A turning point in the process was realising that another poem I wrote while I was working on the prints, a poem I thought was nothing to do with Jane's work, could do some of that binding I needed. Another turning point was showing a rough early draft to some women poets I meet with every month, who liked the very spartan bits and who suggested it could do with a regular form.

It is an amazing challenge working like this. It's an exchange as well as an opening up. It's like someone describing a view and pointing out all the stuff I might have missed. Sharing the excitement of making something new, though, also seems to extend the pleasure. It certainly makes up for the washing machine breaking down on Sunday.
Posted by Jackie Wills at 6:04 pm No comments: 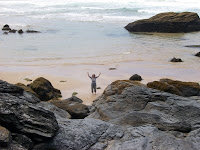 Posted by Jackie Wills at 9:01 am No comments:

It might be a rather cliched image of summer, but at least it contains some colour. Bright wellies and neon bootlaces were some consolation for wading through Somerset mud at our annual visit to the Blackdown Hills and the wonderful Tribe of Doris. 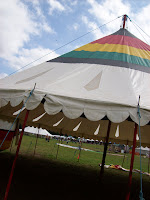 Doris is a summer camp rather than a festival and works you hard if you let it. I chose beginner's African dance this year and the songs of the Orishas. The dance was a fantastic daily workout to prepare me for winter. The singing reminded me, as it always does, that the soul needs sound too. 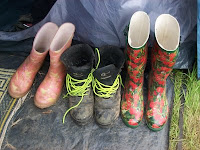 I have written virtually nothing this summer other than brief notes in my travel journal. I'm still on the post-Commandments plateau and my confidence in the poetry returning is being tested now that I'm back at home. On the cliff path, in the marquee, around the Doris fires and standing in the back line of the samba reggae dance class, it didn't seem to matter. Now it's a test of faith.
Posted by Jackie Wills at 11:01 am No comments: