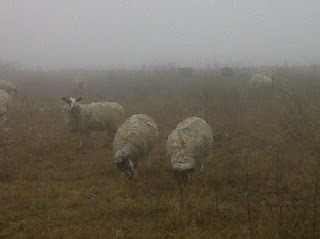 Sylvia Plath's poem sums up this afternoon on the racecourse, at least its title does. The urban flock on a single slope isn't as dramatic as Plath's hills and her sheep are merely hooves. But her dolorous bells became two foghorns, one bass, one treble, taking turns as the neighbour's dog raced into oblivion. I was disorientated, navigating by blackberry thickets. Other walkers were silhouettes - faceless, impossible to identify as man or woman until we were just a couple of feet away. It was my first walk since emptying a box of Milk Tray almost solo. I've been nurse, scribe, briefly a path clearer and mostly a cook and cleaner. As January sidles closer I dread the days of invoices, bank statements, receipts and accounts. I have shoved everything into the same shoebox under my desk for 12 months. Last night I watched Baraka and realised how little of the world I have seen. So Plath's dark water was ahead of me as I walked to the twin warnings pulsing from the sea.

The hills step off into whiteness
People or stars
Regard me sadly, I disappoint them 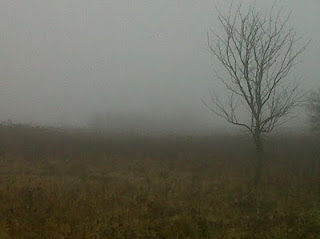 Posted by Jackie Wills at 11:41 pm No comments: 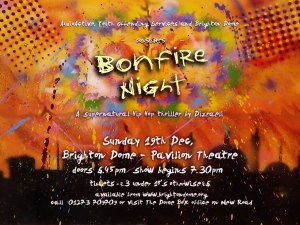 In the streets of Brighton, an agent provocateur and mischief maker, "a body without bones," cultivates arson and murder.
Dizraeli's rap drama, Bonfire Night, was reincarnated at the Pavilion Theatre last night, generating enough energy to power Brighton's Christmas lights.
The writer, a cast of teenagers and the relentlessly innovative youth arts organisation AudioActive earned their foot-stomping curtain calls.
There were a dozen young people in the play, first put on in 2009 with a cast of four. It's a modern morality play, a tale of the supernatural and its script has the satirical edge of Alexander Pope, interrupted by lyrical reflections on teenage life.
It would be harder to find a better example of arts for young people than this. Rappers Tom Hines (who did a guest appearance in the play as an incompetent copper) and Dizraeli work as tutors for AudioActive, a Brighton based organisation that's raised the status of hip hop in the city thanks also to the unremitting commitment of Adam Joolia.
I declare an interest. These men have given my teenage son life-changing opportunities. They prove the point of writing and composition, why you keep appointments, rehearse and what stage presence means.
Tom is one of the best freestylers in todays UK hip hop scene. He's been working with AudioActive for about 2 years. Two of the cast, Jamal and Mrisi, are also featured on the ITV Fixers Christmas single, Common Ground, downloadable on iTunes.  Bonfire Night cast: Tom Sissons, Jamal Ali, Mrisi Makondo – Wills, Emma Blu, Sam Maryon, Jordan ‘Rizzle’ Stephens, Sami Doleh, Dizraeli, Tom Hines, Alex Lynch with rappers Ryan Jupp, Alex Massarella, Jermaine Heat, Jake Bradford, Seeya, Ro Ocean.
Links to AudioActive, Dizraeli, Hines & ITV Fixers:
AudioActive https://audioactive.wordpress.com/
Hinesy Hines http://twitter.com/hinesyhines
Dizraeli http://www.dizraeli.com/
ITV Fixers http://www.itvfixers.com/
Posted by Jackie Wills at 12:28 pm No comments:

The demonisation of 'No' 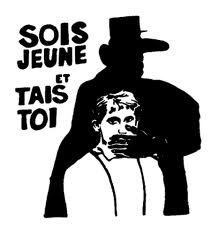 In 1990, I went with Jane B to Trafalgar Square to protest against the poll tax. We were people watching from the National Gallery steps, making our statement quietly and enjoying the carnival. In an instant, it turned. Mounted police charged, people scattered and we managed to get into a pub before they locked the doors. It was later reported as a riot, with demonstrators painted as aggressors. That was not what we saw. We saw a wall of police on horses coming for us without warning, provoking panic and with it justifying almost any tactic the police cared to use.


In 1986, I was working for INS News Agency in Reading and was sent to Stoney Cross in the New Forest with a photographer because the agency was tipped off about a massive police operation to evict new age travellers. At dawn a line of police moved into this peaceful, problem-free settlement,  forced whole families out of their vans which they then towed away. Thatcher's response to 'no' was bring in a Public Order Act and prepare the ground for her successor John Major to outlaw a whole way of life with the Criminal Justice Act.
So when a friend rang me last night in a state of shock after the student protest in London, the demonisation of 'No' was one of the things we talked about. Let's face it, when thousands of students walk out of college and school to demonstrate about their right to education, it's embarrassing, isn't it? Better not to have them on the streets.


I believe what I've been told by people in the protests about police being provocative, heavy-handed, offensive and aggressive because I've experienced it on countless demonstrations and in most other dealings with police. Hostility and rudeness is too often the first response to the most innocent question.


I believe the friend who tells me she was almost impaled on a spiked fence when police charged down Victoria Street with utter disregard for people's safety, because she has no reason to lie.


I believe my daughter when she tells me about teenage friends who were beaten up by police on two separate demos because I've been on picket lines and seen what happens when adrenalin runs.


You can write the script and apply it to almost any demo: David Meynell, deputy assistant commissioner of the Metropolitan Police, in charge of the operation, said a peaceful march had been "completely overshadowed by the actions of about 3,000 to 3,500 people in minority groups"....The Home Secretary David Waddington is expected to make a statement to the House of Commons on the rioting tomorrow. That was how the BBC reported the poll tax 'riot' in 1990. Sound familiar?


So, without wanting to join the conspiracy theorists, but bearing in mind all that we know about dirty tricks, unregulated activity in the name of national security and what the last Tory government did to the unions, the rights of assembly and trespass laws.....shouldn't we be concerned about kettling, allowing mounted police to charge children, keeping the streets clear for Christmas shoppers? If kids can't protest, we can wave goodbye to demonstrating about wars, national security, corporate culture, free speech, tax evasion, bankers and corruption.


http://parfitt.posterous.com/low-orbit-ion-cannon-with-hivemind-loic
http://everything2.com/user/tifrap/writeups/Sussexians+have+31+words+for+Mud
Posted by Jackie Wills at 9:41 am No comments:

Sometimes Brighton Pavilion finds itself. Today is one of those days.

Posted by Jackie Wills at 5:52 pm No comments:

Snow shrine, Sweats and a performance of Weight 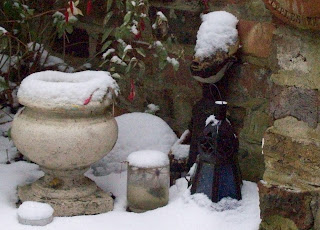 The African statue with his back to the wall has lost his legs to woodlice over the years he's been outside. Today he looks like a Beefeater guarding a glass of ice and a summer  lantern.
Last year the teenagers were out the first morning of snow in the dark chucking snowballs, but this year the cold and the cuts seem to have inspired an adult weariness, fewer sparks of excitement.
I'm looking forward to moving slower, leaving the car, interrupted routines. The onslaught of increasingly mind-blowing Tory plans has been exhausting. And last week was busy - I read some of the new 'Sweats' series at the Red Roaster, an event with Brendan Cleary and Matthew Sweeney to launch Matthew's new book, The Night Post which brings together a selection of older poems. It's always good to hear Matthew read and always an honour to share a mike with him. He's a one-off and his influence has yet to be fully acknowledged.
I always look forward to a monthly workshop with other women poets. We get together in London to share feedback on new work, so I took a poem that has spun off from 'Sweats'. Trying to explore menopause has become a pivot for a certain kind of new work, much more pared down. This approach has undoubtedly been influenced by the comments of the excellent poets in the workshop.
Back to Brighton and a pit stop before going with my daughter to see Weight, a dramatisation of three of Catherine Smith's stories, directed by Mark Hewitt. It is great theatre, minimal and true. Two stories are disturbing, graphic and gripping. Catherine and I had discussed the explicit images in one of them and whether they were appropriate for a teenager. Neither of us was really surprised they turned out to be tame by teen standards.
The third story, surreal and uplifting, describes how a woman discovers flying, post 50, so I went into the Lewes night a few inches off the ground thanks to Catherine. The stories are from her new short story collection, The Biting Point, hot off the press and available from Amazon or Speechbubble Books: www.speechbubblebooks.co.uk
Posted by Jackie Wills at 1:56 pm No comments: