These are some of the women whose genes I share. Women from both of my parents' families, although only one survives of my mother's mother, Ida White. She's the one I most resemble.

Today I'm 58. When I put the recycling out this morning, the moon was a bright yellow circle in the west, over Roundhill Crescent in a clear sky.

The sun was coming up over the old workhouse, now Brighton General, that before long will be rebuilt as flats.

It's a day of mourning in Brazil for a nightclub that became a charnel house and in Mali the kora and griots' notes that hold centuries together for us are threatened with silence. 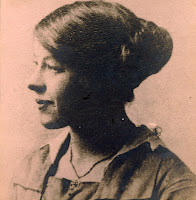 On my table are cards with an owl and an girl, a harbour, grey cottages, a man and dog, a woman under a vine with a dress made of feathers. On the news this morning are plans for a railway that will be opened in 2033 when I'll be a year younger than my mother is now.

I was born in Salisbury general hospital and although I have no conscious memories of Wiltshire the landscape feels familiar. It was the first I knew from walks with my mother over the plain to Stonehenge.

My family divides between Merthyr Tydfil in south Wales and Lyndhurst in the New Forest - although the only trace of the Lyndhurst family is in census records. My mother was brought up in the midlands and my father's family left south Wales for Wembley.

On both sides are emigrants from Ireland - Hannah Wills from Merthyr and Thomas Harte, my mother's father.
So at 58, counting my blessings, I am grateful to Hannah the politician and Ida the brave mother of seven who was a domestic servant so young. To her father, a house painter, my great grandfather the chemist, to the inevitable laundress one of my great grandmothers, my unknown great grandfather a shoe-maker, to anonymous gardeners and small-holders who kept their children alive.

Like Sylvia Plath, Sharon Olds set a standard for confessional poetry with her earliest work. In a lifetime of writing she has not looked far beyond the family for her subjects. What a decision.

Her first major UK publication, The Sign of Saturn quickly established her as essential reading. Every book she has released since has made us talk about her.

For the first time, women were in the majority on the 2012 TS Eliot prize list. Inevitable then that a woman would win? Nothing's guaranteed. There will be plenty of chatter. It's already begun - she's too journalistic etc. etc. I haven't read Stag's Leap yet, but I know her influence is phenomenal.

And as the congratulations go back and forth, let's remember Slow Dancer Press and its amazing founder, John Harvey. In 1987, Slow Dancer Press published The Matter of this World, her first collection of poems in the UK. Active between 1977 and 1999, the pamphlets John Harvey produced through Slow Dancer are a fine snapshot of contemporary poetry at the time.

This is the job small presses do. Congratulations to John Harvey, who dedicated more than 20 years to publishing poets and whose list had a good showing of women writers.


It has been impossible to write with anxieties about the new year, earning a living, making the most of my time. But I have been able to read - browsing Carl Sandburg's Selected Poems that has a searingly honest introduction by Paul Berman, hardly complimentary, The Body Electric, an anthology of poems about the flesh edited by Patrice Vecchione and novels, They Came Like Swallows by William Maxwell, a beautifully written elegy by a craftsman, and Night Dancer by Chika Unigwe, fascinating portrait of a family from an interesting Nigerian writer living in Belgium.

I am now reading The Shadow of the Wind by Carlos Ruiz Zafon, set in Barcelona, giving me itchy feet to be back there. A fabulous, intricate novel about a library, a cemetery of forgotten books and the story of a forgotten writer. I found it hard to get into, but went back to it and am now immersed. The Body Electric includes the poem Semen by Pablo Neruda that starts with the lines:

Because no words suffice for this cry
it lives as a blood-coloured syllable.

The stag could be staring into that metaphor! 2013 will be the year of new metaphors. My feet itch for them, for travelling and discovering them. Yesterday I cleared a woodpile on the allotment, dug weeds, put down black cloth to suppress weeds on patches where I'm going to transplant berries, put polytunnels for delicious Italian parsley, dark green kale in the spring.
Posted by Jackie Wills at 11:29 am