The old poetry magazines scattered around my house have been in hiding in lockdown for fear of the Amnesty donations bag. But as I dusted them off I realised they've earned their right to stay. They tell my story as a poet alongside that of many others.

When I started sending work to magazines I relished the company I found myself in. I read new work, my horizons grew. In April, the Poetry Business is bringing out a book I've written on some of the poets that influenced me and work I've done in turn, helping others write. It's On Poetry: Reading and Writing Poems. 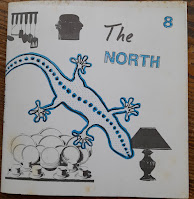 In a nice circularity, the PB produces The North, one of the first magazines I was accepted by. I was an honorary northerner in magazines produced far from Surrey:  The North, The Wide Skirt, The Echo Room, and I was in the company of poets who have continued to create work that influences how we perceive the world.
Some of these small magazines and presses are long gone, others like The Poetry Business, Stand, Poetry London and The Rialto, are still giving new writers their first chances in print, providing an essential vote of confidence in the word on the page, their writer/editors deep in the business of supporting others. 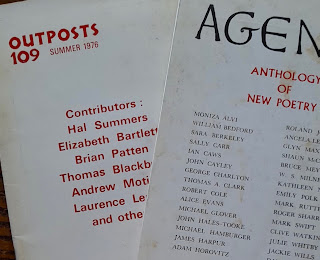 Outposts was one of the first small magazines I bought in 1976 - its cover features Brian Patten, Andrew Motion and Elizabeth Bartlett. Carol Rumens wrote about Bartlett in 2008 "she remained a noncombatant  in the prize-grabbing poetry culture that developed in the 1980s." Bartlett worked in the health service and she lived not far from Brighton most of her life. Her name on the cover stands out for several reasons, but for me, now, as proof of the importance of keeping going.
Posted by Jackie Wills at 2:25 pm No comments:

Shall we talk about age, then? Its challenges (incontinence, unreadable text, mumblers),  the advantages of retirement, why some of us are ashamed of the time we've spent on the planet instead of owning the idea of accumulated experience.
Is the noun, elders, a way forward, instead of the adjective, elderly? And when an organisation represents itself with a wall of faces in an amorphous age range of late 20s to late 40s, is it time gently to point out the demographics of the northern hemisphere?
In the spirit of my 'words for women', versions 1 and 2, I have browsed the historical thesaurus to find words for old. There were the obvious, but I was struck by 'wintered', 'ripe', 'far', 'crusted', 'badgerly'. I liked the collective noun, an 'ancientry', and wondered about the lives contained in the word for old age, 'anecdotage'.
Generally, an old woman is not well served by the English language but there was something in the word, 'pantywaist' from the historic thesaurus that I found beautifully clownlike and reminded me of Goya. I'd love to know how other languages treat the old.
Posted by Jackie Wills at 12:02 pm No comments: