John Baloyi's crocodile in the Polokwane museum and art gallery was one of the first sculptures I saw by an artist from Limpopo province in the north of South Africa. Not entirely the first - I'd seen a small figure in pale wood by the charismatic sculptor Jackson Hlungwani who was once guided round the Edinburgh festival by my former partner.

The art scene in Limpopo is tight knit. The year I saw Baloyi's crocodile, we visited Jackson at his home in Elim and in turn he took us to Baloyi's studio nearby. Sadly Baloyi wasn't in, but at the entrance was a spectacular giraffe chair - an Alice in Wonderland vision. So when I went back in July for the first time in six years, it was an obvious place to visit. The trip was my 18th birthday present to my daughter and there were many places and people who'd changed but both of us associated the north with its artists. On top of that, this was the area her father grew up in and Jackson had been a friend of his.

So on a hot winter day we remembered Jackson (now dead) by setting off to find Baloyi's studio again, this time without his teacher. Jackson outlived Baloyi by four years and died in 2010. Baloyi died before his time in a car accident in 2006. You arrive at Baloyi's studio on a nightmarish dirt road, leaving Elim on the road to Giyani that dips into a fertile valley with steep rocky sides. There are new houses being built everywhere - a sure sign of change even in this traditionally poor rural area - old lorries belching fumes and a surprising number of 4x4s, BMWs and Mercedes  in school car parks.

Then there's Baloyi's world - visionary, searching, challenging, affirming - the world of a man who stayed where he was and let the world find him.

The studio is a warren of small rooms painted with figures and patterns, sculptures made from the long twisted branches that seem to be everywhere in this lush and wrecked countryside. There's a wall with circular windows made from car wheel hubs, small sculptures in corners, large gaping faces or bodies reaching upwards, animals.

There's a drum with a tail and legs, another shaped into a crocodile. Each door way leads into another corridor, but there are wasps nests too and the grass roof of a round house built into the studio like a side chapel is falling in. You leave through an outside carving space and you're at the front of the house where walls glint with mirrors and grey tiles and the steps are mottled, polished yellow, black, ochre and green concrete. 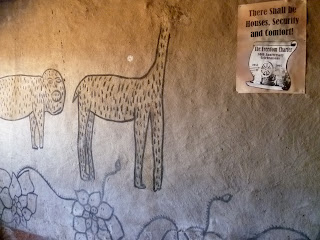 Here one of his widows is washing clothes on a low wall - the same woman who opened the metal gate to let us in, asking nothing, quietly showing us the entrance and acknowledging it was open.  Under a tree near the entrance is a collection of the Venda pots the region is famed for.

Who knows what's behind this decline. The woman who let us in seemed exhausted, defeated, unable to face the challenge of maintaining a studio of this kind that would properly honour Baloyi's work. But as we left we wondered where the curators and dealers had gone. How those in the art world who'd sought him out within the country and internationally could allow this astonishing place to deteriorate to such an extent. 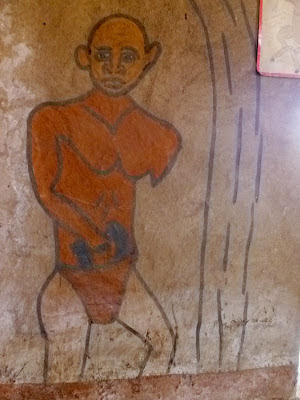 There were tributes to Baloyi after he died in the Mail and Guardian and South African Art Times, among others. His work is on show worldwide but one of his last was Godzilla at the entrance to Johannesburg's Constitutional Court. The Sandton Convention Centre has his Defeated Soldier on permanent display.   So what's going on in South Africa, that this man's work (like Jackson's) is respected enough to honour the constitution, to be on show to the richest business peoplein the world (in Sandton), is now so scandalously neglected? Who knows what might already have disappeared from his studio? What damage the next torrential summer rain will do as it pours through the hole in the roof. The ANC has had its hands full since 1994, adhering to its promises post-apartheid. But there's wealth in the country and a healthy enough art scene, judging by the galleries in Johannesburg alone, to restore this unique working space and honour the legacy of John Baloyi.