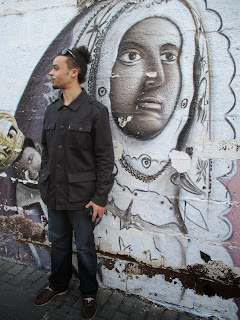 The thing about a title, the best, is that it will make its presence felt long after the book's read and the finer details of it are covered by the silt of other memories.
So, in Tenerife, what else would come to mind but Malcolm Lowry's brilliant exploration of alcoholism, self-destruction and the tropics, however inappropriate the book may be as a celebration of my mother's 80th birthday.
I first read it as a student and tried to re-read it a few years ago but didn't get far enough. I am determined to try again if only because the title wouldn't let me go in the week before the week before Christmas, when Teide (Tenerife's highest peak) was our birthday destination.
And mingled in with Lowry's title was Carson McCuller's The heart is a lonely hunter, a novel I'm still savouring in between others, in awe at her skill so young. Then there was Elizabeth Bowen's Death of the heart that I took with me on holiday, a halting period piece about how pain, loss and cruelty are generated almost seamlessly by dishonesty. 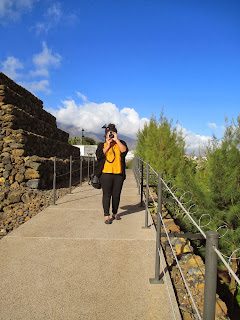 So going away to make sure Mum had a unforgettable 80th gave me a pause in the lead-up to Christmas because in Tenerife it was barely noticeable. I swam instead of going shopping, ate on a terrace inches from the Atlantic and where I watched the sun rise and the full moon burnish the ocean.
We discovered a black virgin Mary in Candelaria to Mrisi and Giya's delight, dreamed of the Sahara (so close).
The thing about winter sun is the other person it reminds you of who is gradually shut down from autumn onwards and propped up on a sofa in front of a fire.
To reach the volcano we drove through the rain belt, through a pine forest, winding up until we reached fog and finally broke through into a lunar landscape. Of course there were many breathtaking views, from the snow of Teide above us to the shadow of Gran Canaria on the horizon, or the lava fields that stretched away from the house, northwards, fishermen's shacks burrowed into them, nets draped over the sharp, charcoal-like formations. 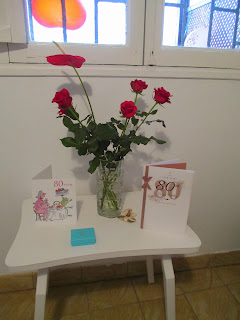 And it was a break from writing, although I had started a series of poems called Island Years, inspired by a scientist's account of bird life in the Hebrides in the early 20th century and I managed an Island Years 7, which I may or may not lift out of the notebook. It's too early to tell.
Writing was the last thing on my mind after an almost constant round of proposals and emails in my attempt to find work, feedback for students on a Brighton course I'm tutoring and a winter slide into pessimism.
Mostly, though I was still mourning my friend Sue Eckstein, who died on 10 November. I met Sue in 1992 when we were both pregnant with our first children - me with Mrisi, Sue with Anna.
Sue, Alastair her husband, and I went to the pub after hilarious ante-natal classes at our GP's surgery and remained friends, to the extent that I feel my experience as a mother was inextricably linked to hers.
We moaned over drinks in the Springfield pub, we talked about writing and after Sue's first amputation we co-presented a paper on using humanities in medical education. 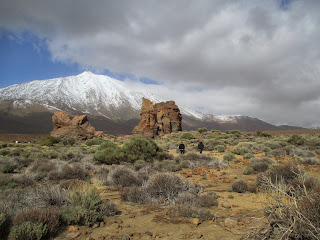 Sue had a rare bone cancer that led to a below the knee amputation and a second above the knee amputation, but then a tumour grew in her pelvis.
She was probably the bravest woman I knew. I admired her intellect, her writing, her compassion and her honesty. I loved her books and her plays.
So in the chill, under the volcano, I thought of Sue as well as the celebration of my mother's 80th. I have thought of her every day, probably, because she showed me how to live, she distilled what was important and she crossed the Atlantic as her farewell to the world.
I last saw her at the end of September when she was planning her final journeys with her brothers and then with Alastair, Anna and Seb, her son.
In Tenerife, I thought of her because the Atlantic crashed at the foot of the terrace and because she is the third of my old friends to die - Solomon whom I met as a student, Alan who was the reason for my brief stint as a bass player (our band supported the Jam at Guildford Civic Hall), and now Sue. Three people so critical to those three life stages walk that lunar plain below Teide, flicker in and out of 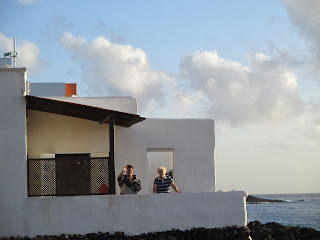 the breakers below sunny terraces and inhabit so many other landscapes, both strange and familiar. They walk into the new year with me, with everyone else they ever met and made an impression on.
And how grateful I am to them.
http://www.myriadeditions.com/sue-eckstein

I wanted to halt the clock for you, make up
for the minutes it drops, to steady its hands,
slippery as walnut shells, over a liner leaving America
carrying you, Alastair, Anna, Seb and the sun, to light
your crossing.
Now evening's coming in,
the Downs slip towards the Marina and starlings dance
to their roosts in the ironwork. The minutes are settling
into layers sweet as filo steeped in honey - one minute lit up
and dim as Berlin used to be, one shaking its head slightly
as another slips across the road, into the verge.