The park is crowded, the gallery is empty but there are prayers inside and out: Venda Sun 15

This was the trip for Giya's 18th birthday. Mrisi went with R for his and I couldn't go. I have spent several weeks joking about going on holiday with my ex. I hear one of my oldest friends has died the day before we leave and I will miss his funeral.

Joe, Margaret, Mpho, Nkensani and her baby Moma and Mani were all waiting in the garden. It was warm in the sun and glorious being able to sit outside, but it’s cold now so we've lit a fire. There are weaver bird nests in the palm tree and I’m sure I saw and heard a hoopoe , just one, on the neighbour’s roof.

The birds woke me up with their watery chorus, the same sound I remember from the north, liquid, high and sweet, notes running into one another. Each room in the house has a heavy old chandelier of lights. Bare wood floors. High ceilings with plaster mouldings. I dreamed of bags of coal.

There are doors to outside but they're blocked. I'm still disturbed by every window with bars on. Every door is locked. But where are the keys? I wish I'd brought my metal teapot. On the table is a beer mug with pink and yellow roses in. The antimacassars on the sofa and chairs read RELAX AND FEEL AT HOME around a bunch of red roses. The coloured glass in the windows is the same as in the panels of my front door, but green, not pink.

Around 1 we walk into town to get Nkateko jeans from Mr Price. We walk through Kensington, past a sculpture of a bed, past Spaza Arts and straight into the old city centre, a non-stop stream of cheap bedding, cloth, textile, homeware shops. The street sellers are selling belts, single electrical elements  and coloured popcorn as well as the usual bowls of fruit and vegetables. A Shangaan woman's sitting by the garage grilling corn cobs and we buy two for 20 rand. There's a guy at Mr Price with a sub machine gun and he's pointing it into the shop, but he's just a security guard and they're collecting the takings. So we scoot around the corner to another Mr Price, in the Carlton Centre. The Carlton Centre is down at heel, how I remember the rather faded centres of Bracknell, Merthyr, Reading, built a long time ago in a time when Zimbabwe was called Rhodesia and women wore headscarves and people thought prawn cocktail and thousand island dressing exotic.

Mostly what I realised, in much the same way as noticing the impact of liberation on Vereeniging, was that the old centre of J'burg is almost exclusively black and African. It feels like a shell. Massive old industrial buidings that all once provided work are empty, or as Jo pointed out, some kind of shelter for the homeless.

Closer to Kensington, in another street of old shops that seem almost like toys or play sets, the artists are moving in. Main Street, the wide vast artery through the old centre, is changing. Pavement mosaics randomly appear across broken pavements.There seems to be no purpose to where they start, no doors, no meaning. They cross the pavement in a band, at an angle. Then eventually they stop. From time to time there'll be a fabulous piece of mural art on a wall, or a line of washing, a woman in a kiosk with a most amazing head, a hand painted sign or a note on a door.

It feels like a long walk back to the house. It's suddenly chilly. There are fires by the road and groups of young men. Later R suggests we go out to Melville. Suddenly no litter, no gangs of kids, just white people, retro shops, a secondhand bookshop and bars. We end up at the Loft where there's live music, a trio doing Adele covers and I'm exhausted but a glass of red wine goes down well.

We're listening to the music and chatting or trying to and I notice a woman at a table by the window and think she looks familiar. Look again and there's a noisy emotional reunion: V a bit drunk and hugging a lot and then reminiscing about her and R growing up and being arrested together, trying to persuade us to go to Cape Town.

We wash and drive to Joubert Park for the J'burg art gallery. Into Hillbrow, more litter, people, chaos.
Then, on the pavement, there are hundreds of people singing. On both sides of the road are barriers and security. It's Sunday and church. We walk past groups of women in white, men in navy and white, groups of people in ZCC uniform, the metal star on a purple square of cloth.

The park is full of people and music from a big screen. Couples, cats, boys, homeless men asleep. A guy holding up a pair of jeans from a bag.

The gallery's empty. A woman explains the exhibition by the artist James Webb - a sound exhibition, the scream in one room based on Picasso's Guernica and another room of titles on white walls, titles taken from exhibits in a Nagasaki exhibition. There's a beautiful two minute video of the inside of the Oriental Plaza in Cape Town before it was demolished and an Imam singing the call to prayer. Then the main room is covered in a massive red carpet with speakers on the floor, each of them with the sound of someone praying or singing a prayer. It's incredibly calming and peaceful. What we needed. I could have lain down and listened all afternoon but we ended up driving to the Market Theatre which was closed. I imagine Sandton as the place where the other J'burg exists. Rich, white, neat, litter free. 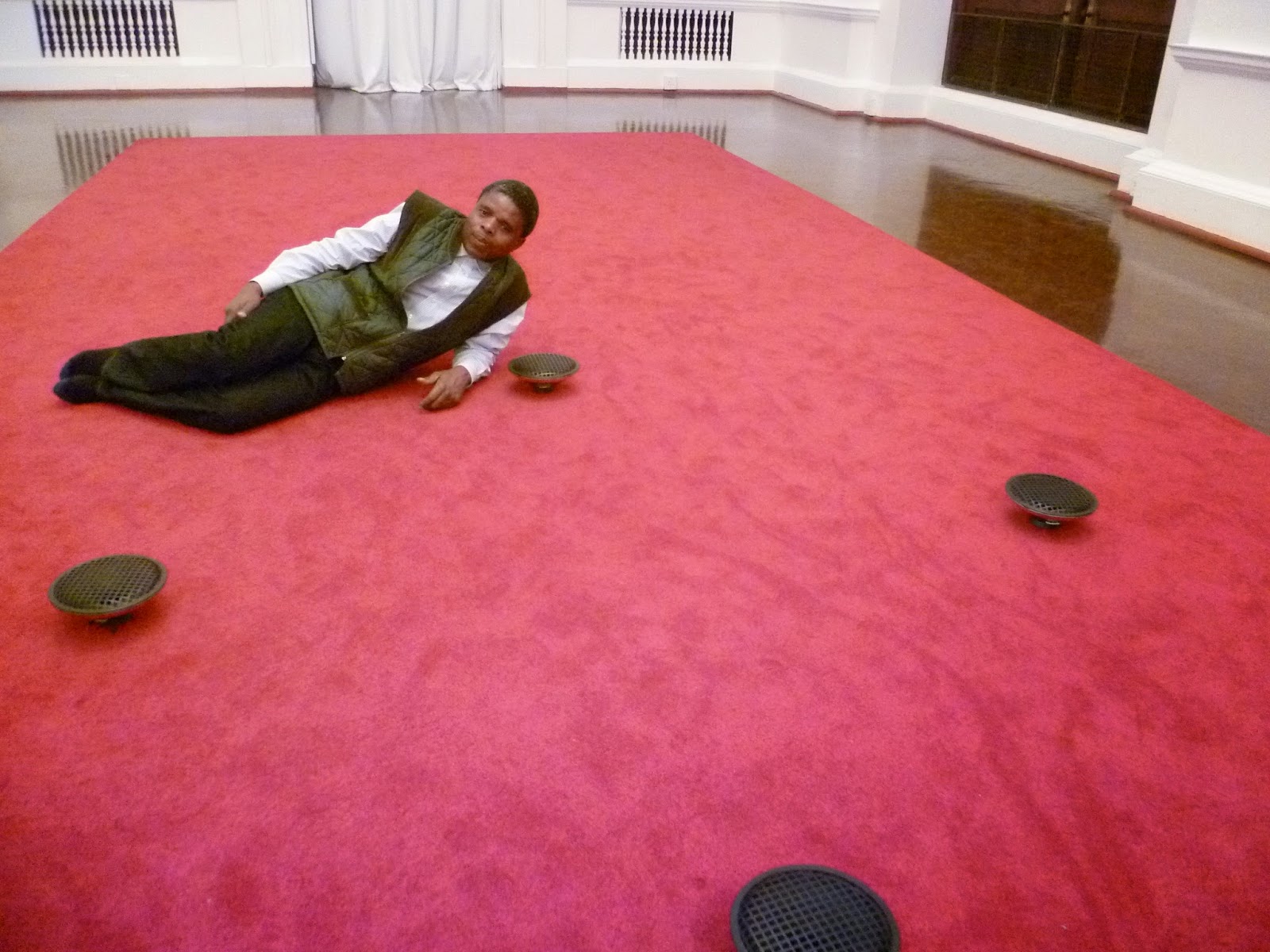 One of R's neighbours asks us to Rosebank to see some galleries on Wednesday, including the Goodman Gallery. Exhausted, falling asleep at 6.30, I eat the remnants of the gorgonzola I brought with me. Avocado and tomato and rice salad. Grated carrot. The rest of the lentil stew.
Posted by Jackie Wills at 2:16 pm