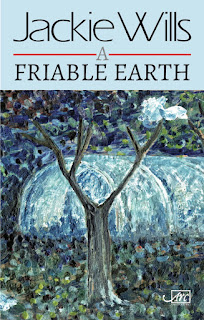 It's more than 20 years since my first collection, Powder Tower (Arc, 1995).  A Friable Earth is my sixth but I feel I'm going back to the beginning, to those days when I was driven only to share my experience and find the details or metaphors to carry it.
There are poems from words used to describe older women and our ailments, crossed with poems about homelessness and mental illness from a city allotment bordered by a cemetery and a road. One of the earliest soil scientists makes an appearance - how could he not? I hope the title will invite you to pick up a handful of soil - we need it to be healthy.
Sylvester Stallone comes into a poem about beauty, there are elegies to dead friends, my brother, aunt, father and to a young man who thought he could swim to England from Calais. All these poems are bound to everyday life in the 21st century and they ask what we mean by life expectancy, by loneliness, by an age-defying cream?
When I was told I'd never have another smear test it marked such a transition that I had to begin with that poem. But it also asks about love and I hope the last poem delivers on that score.
As in most of my collections, there's a group of poems from South Africa, the country my (adult) children's father, musician Risenga Makondo, is from, a country I've visited four times while they were growing up. One of these poems is a tribute to Gwendolyn Brooks and there are two more tributes, one to Robert Lowell improvising on his poem 'Skunk Hour', another to Elizabeth Barrett Browning, nodding to her famous Sonnets from the Portugese No. 43
The cover painting is from a series on allotments by Jane Sybilla Fordham, an artist who, with sculptor David Parfitt, is responsible for the memorial to people who died in the Shoreham Air Show crash.
The Ancestors is a Guardian Poem of the Week August 2020
Carol Rumens writes an upbeat analysis of The Ancestors in the Guardian, an appropriate time for the poem to appear since I wrote it originally for Jane Fordham's birthday, which is at the start of August. I amended it slightly and sadly because the title is part of the poem, there's not dedication or mention of Jane. But the rampaging and rumbustious ancestors are thanks to some of her monoprints and lots of conversations we've had about women's history,  the hens, pears and silver birches from her garden, the possets from another project we once did together. Rumens kicks off her reading of the poem with two phrases that make me smile with gratitude: "gustily paced" and "cheerful anarchy".
World Book History review
It is reassuring to have at least one proper review of a book that took so long to write. Even better when the review reveals someone has read the whole collection. Better still when that person likes it.
I have no idea who writes the World Book History blog, but I like their style. Although A Friable Earth was written and published before Covid 19, the writer relates it to the uncertainties of 2020-2021 (and ongoing). The review focuses on how I explore ageing and what the writer describes as "ecological love".
"Ageing womanhood is still a taboo in Western society. Frequently misrepresented and oftentimes ignored, the perspectives of women over 60 should be another bolt in the educational foundations of life."