A plunge neck and new wardrobe

Yes, retirement time is becoming sewing and sowing time. Giya was here for a week and we had a lot to catch up on. Flowers and clothes. I was tidying up the edges of a shirt I made her, amending a shirt she bought. I was listing summer (end of July) flowers and what's either side because summer as we know has become unpredictable.

Then the dress of the day. I went into google, coming back endlessly to the same thing - nothing was quite right.  Initially she asked if I could adapt a Liberty pattern I made up for her before she left for the Netherlands but I was reluctant. Was I good enough?  After all, this is for a garment that's going to be in photos for the rest of our lives. And the fabric will be pricey. Yes, I'm making the wedding dress.

The latest pattern is beautiful, the pattern itself provided as a downloadable PDF by a newish French company. Given that Giya and I spent a disappointing day in London, the internet saved us. Or at least I hope it has. Did she find the pattern scrolling through Instagram on the train on the way home, or when we were sat by the fire later? After hours with one idea in our heads, plunge neck, slit skirt, interesting sleeves, she found a design that fired her up.

I haven't made up the pattern yet, neither did I print off 50+ pages of A4. I took it to a copyshop. The biggest challenge will be drapery. Technical but important. As for London... We headed first to John Lewis in Oxford Street because in my mind was an entire floor of fabrics and pattern books. My best Saturday job when I was a teenager was in a fabric shop in Farnham. To me a fabric shop is still a preview of paradise. Fabric, after all, is human history. But....John Lewis.

Tucked away beyond kids stuff, including gruesome toddler clothes in the style of a country gentleman, is a corner with a single amalgamated pattern book and a range of fabrics I'd describe politely as an excuse. Yes, we found dupion silks Giya and I both liked the look and feel of, there was nothing else I couldn't find in Brighton. Onto Liberty... The prices, another world neither of us is part of. I should have known my past really is as lost as the blouse I made out of tana lawn decades back....

Onto a small haberdashers nearby where I bought sashiko thread, hooks for a vintage lace coat I've pressed onto Giya, and a helpful young assistant who recommended looking for patterns online.

Disappointed, a bit tired, shocked by crowds, by a man collapsed outside Liberty surrounded by police and paramedics, a helicopter circling overhead, by the unfamiliar consumerism of Oxford Street we decided to buy our fabric in Brighton. My task now is to try this pattern out and see how it falls. It's going to take more than one dry run. 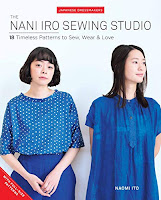 I feel honoured as well as terrified.
I'm growing some of the flowers. I'm making the dress (with, I anticipate, help from my friends.) I'm increasingly grateful we have Ditto in Kensington Gardens, where I bought a length of fine black linen years ago that is still my favourite shirt and where a helpful guy explained about ramie, made of bamboo.
What I did pick up in John Lewis, though, was a standalone book of patterns by Japanese designer Naomi Ito that made me more energised than I have been for a long time. So as well as the dress is a new everyday wardrobe for me. I've been tracing the pattern pieces and am ready to go.
Posted by Jackie Wills at 9:31 am No comments:

Where do I go to love my city?

The pavement's shrinking on Lewes Road, the cycle lane, what little there is of it, too, as bin bags spread and the council suggests we keep rubbish in sheds.

Any shortcomings of communal bins and wheelie bins were vehemently denied by the many who claim to be experts in bin bags.  You'd think they were plated in gold, they offered such solutions to us, the un-initiated and ignorant public.

Once I spoke to a man called Sean about my small black dustbin which he insisted I had to replace with a wheelie bin, so deep I can't reach the bottom. Neither can the bin men, who now leave my rubbish because contrary to what Sean says, they don't attach it to the lorry, they transfer my rubbish to another wheelie bin.

I can't imagine bending my whole body into my bin to grab a small, pungent bag of cat litter, which is all my household generates. But Sean was adamant. If I put my dustbin out my rubbish wouldn't be collected. He threatened me with a communal bin. And his threat was serious - being played out city wide.

Does it need to be like this? Banks of bin bags partying with traffic fumes on Brighton's second most polluted road, booming to the sounds of mobile speakers by night and angle-grinders by day. I loved my city once. I don't blame Sean, only as trenchant as his paymasters demanded. Next there'll be vans motoring around the streets at night depositing pizza boxes and last night's take-aways on corners, as landlords do with sofas when the students move out.

Is there a conversation here? But where do I go to talk about quality of life? Is there a place to imagine a different daily reality? Because the council has failed on traffic, on public transport, on housing, on noise, on recycling, on care of the young and the old.... It enables parking on pavements, skateboards and bikes on pavements, and now great mounds of rubbish. Where do I express my righteous anger? My sadness at the bureaucrats and the Seans.

Posted by Jackie Wills at 11:55 am No comments: 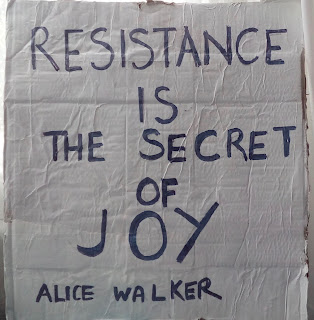 Alice Walker was as much a part of my late 20s and early 30s as the pink bass guitar I played badly and long union meetings in the pub discussing pay, equality and solidarity.

She's a writer I've discovered again and again since the heady 1980s, always with joy. And so with my pension burning a hole in my pocket and a new source of books - NOT AMAZON - I ordered her memoir, The Same River Twice: Honouring the Difficult, because I can rely on her to show me a new view.

I admit I've been questioning the point of writing, of creating anything. I've been reading, walking aimlessly, trying to write but doubting. Friends have tried to convince me to write for the sake of it and I've resisted that too. But Walker can be relied upon to set me back on track.

Here it is, in her preface, at the bottom of the first page: "Art is the mirror, perhaps the only one, in which we can see our true collective face. We must honour its sacred function. We must let art help us."

Posted by Jackie Wills at 9:26 am No comments: