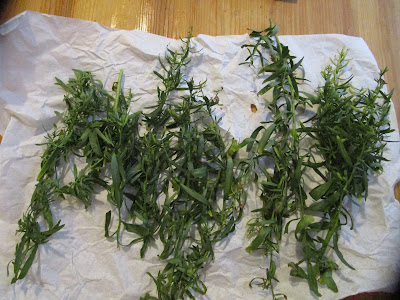 Tarragon, grown by me, dried by me
I open the top gate to the allotment and look down towards the plum tree. The top and middle height branches are bare of the green fruit I'm looking forward to collecting. Under the tree plants are trampled, pots knocked off chairs and table.  Someone, or more than one, has brought a ladder and stripped all the fruit from head-height up, leaving just over-ripe yellowing plums, bruised, rotten or squirrel damaged and unripe maroon plums that are the rootstock the green was grafted onto. I write a note and tie it to a branch warning anyone who thinks they can steal any more they'll be on camera. My new allotment neighbours have lost all the fruit from their tree, the allotment rep too.
I caught a woman once helping herself to raspberries from my plot with her floaty skirt and trug over her arm. She claimed to be foraging and that it was allowed. I told her to fuck off and she got the message.
But this morning my daughter sent me an Instagram screenshot - a local restaurant boosting its cred with news of plums from a forager. Not the same plums as mine, thankfully, but it got me thinking again about foraging and how it might be misunderstood on so many levels.
A friend tells a story in which I rant about foragers at a party and true, I will, given half a chance, after an encounter with foragers en-masse, led by a truly misguided guide from a Brighton organisation, a tribe with buckets and ladders off to strip local trees they claimed no-one knew about.  Well if you're a forager and reading this - we locals know about these places and trees,  and we pick for ourselves, not for sale and not for making money from courses. Sad to say, foraging has become commercialised like everything else by Brighton's capitalist hipsters. In the late stages of the worst kind of capitalism it's not just restaurants, but now events that are commercialising wild food.
How, in whose philosophy, in whose book is this acceptable? So here are just some of those boasting about foraging or foraged food (it includes a journey into the soul) gleaned from an initial websearch. I'm sure there are many, many more lurking in woods, car parks and on footpaths.

Posted by Jackie Wills at 10:19 am No comments: