These days will pass - a history lesson 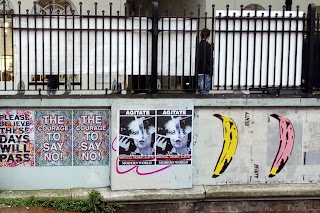 I read the slogan from the top of a bus going into town. The Co-op in London Road had just closed and people were sleeping under the arcade.

Behind a tent and abandoned duvet, through the rain, PLEASE BELIEVE THESE DAYS WILL PASS was like kindness from a stranger - a message to those people sleeping rough, to anyone passing by, to people going to and from work, driving into and out of town. The Tories were still celebrating, I think, but maybe my memory's playing tricks.

Contractors have since boarded up that space in front of the Co-op. It's going over to students, like the other Co-op department store in London Road, like the old people's home at the bottom of my road, like the giant skywards newbuilds on Lewes Road.

And it's hard to believe in change in our Brighton and Hove bubble, where although we are green and red, politically, actually within the city it seems that every centimetre of land is monetised and open to abuse, every service privatised, and if you are a free-roaming member of the public (as opposed to a tourist bringing cash in) you are the enemy.

I for one need more of this beautiful slogan because as well as kindness, it made me think about the great historical changes we've seen and that yes, hard times do pass. And next to it more encouragement, not pressing anyone, just allowing the act to stand on its own, THE COURAGE TO SAY NO.

So much works against that courage - an assumption that if you refuse anything you will be punished, built on from childhood, fostered by all those little cards placed in windows - abuse will not be tolerated.

I don't know who made these posters but they make me want to buy wallpaper paste and do some printing.

Like Led by Donkeys, intervening with simple and powerful messages on public buildings, I thank and respect these anonymous spreaders of optimism, as I thank the poets, musicians, painters and photographers who are documenting, in their own media, these difficult days and how to say no.
Posted by Jackie Wills at 10:07 am No comments: 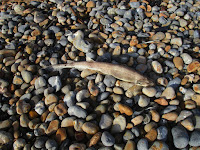 Such stormy weather so the other morning I had to take a bucket and bag down to the beach by the marina and collect seaweed.

There wasn't as much as I'd expected. Some driftwood, plastic, these dead creatures and the seagulls flocking over waves at the marina wall
no doubt for more of the dead.

A flatfish was pressed against one of the beach walls and one clump of bladderwrack I picked up reeked of rotting fish. 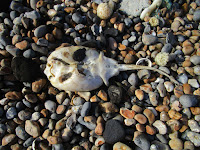 It's a resource I've neglected all these years in Brighton and with the potatoes chitting and storms, it's an obvious move to gather this free soil improver from the stones. 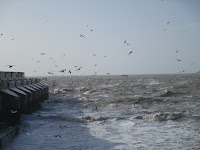 It doesn't go far. I need to make more trips. This is the year of the soil. It has to be. Of worms, of building up that poor foot or so of earth above the chalk.

I've ordered organic seeds this year so I can make a concerted effort to save seed for following years. I've been lazy, or perhaps not conscious of the importance of this. Of knowing how it's done. Of building it into the growing year and the plan for what goes where. It is time, I suppose, for a diagram of the beds, allowing for plants to flower, set seed, provide for years to come.
Posted by Jackie Wills at 11:27 am No comments:

The rapunzel flower and other species

Frost in April, it has happened, as has Frost in May (by Antonia White) but so far this winter, not a lot of frost yet. There's time, as the titles of these classic novels suggest, to be caught out.
Planting one or two things out in the garden yesterday I heard the school children's march in town - it was still, the sound of drums and shouting carried all the way along Lewes Road, up the hill, towards the Downs which are under such threat, the nature reserve now in the council's plans for housing.
It is easy to feel hopeless, just writing emails to people with such ready answers.
On my way to the allotment I passed Ian sitting on Rob's, listening to the radio and preparing to take down the rest of Rob's greenhouse. A few of his friends have been keeping an eye on things while he's unwell. The vine in the greenhouse grew so big last summer it broke through the glass roof.
I dragged three heavy bags of compost, heavier with rain from being stored outside, along the path. One for the small greenhouse, one for a large terracotta trough I'm earmarking for salad leaves, another for a cold frame that I need to put a roof on.
The birds were loud and in the cemetery the grave-digger was busy with the small digger he brings in on a trailer. The days of men with spades are gone, as are the days of people with scythes. It is impossible now to consider the damage. Ian and I moaned about leaf blowers, petrol powered. The lunacy of them.
I've resorted to researching prophesies, signs and auguries. How birds and other animals know before we do what is coming. There was a time I could smell rain. I was probably a child or possibly a teenager.
This is the year to re-learn, study old books recording the behaviour of insects and birds, to refresh the knowledge I might once have been handed by a grandparent.
The city is oppressive. I want to be the robin above myself on the apple tree, an owl in the night.
Yesterday, I wrote about a property developer and I woke up feeling polluted by my own words. They are not the song. It is useless now to rage about idiocy, traffic and this uncontrolled rush to extinction.
I wrote Rapunzel flower, not a poem, years ago at Chesworth Arts Farm in Horsham. It's a six-part list of species. I was entranced by the names. I have always been. Give me lists of species and I'm in a sweet shop.
I watered the compost I'd put in the polytunnel, cut back brambles and protected the cabbages I planted last autumn. I transplanted mizuma from a row of spicy leaves last time I was there and it's survived but it's a gamble. There may be frost, still.
In the small greenhouse I found a big irridescent black beetle, dead on one of the beds. It was a jewel. I put it on a dried artichoke flower. A greenhouse still life.
I won't cut the lawns front or back this year. I'm transplanting forget me nots from the allotment where they've self-seeded everywhere, and ox-eye daisies. I'm careful to dig up tiny self-seeded foxgloves when I find them and save them into pots. It might help.

Posted by Jackie Wills at 10:01 am No comments: 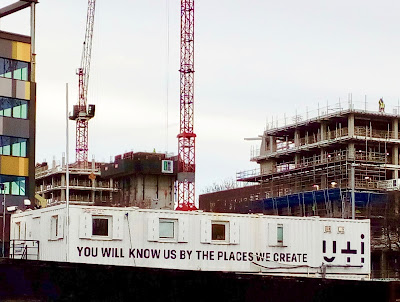 It is an eye catching slogan on this portacabin by B&Q on Lewes Road. A use of language aimed, I'd guess, at suggesting a certain level of responsibility, especially taking into account the company's name, U + I.
It's a property developer, which is probably not a difficult assumption to make, but a property developer that likes to brand itself as different.
Sadly, there's not a lot to distinguish it from any other on Lewes Road. In fact, what it's doing there is actually pretty shocking.
Brighton's always been low rise but the new developments increasingly being given the green light are high. This spot, on Lewes Road, used to be open. It was an old Territorial Army training centre and on the other side of the road there was a car park that created a wide and open run up to one of the old factories, taken over by the University of Brighton.
Who'd have thought so much could be crammed into so little space? The ghosts of the Territorials checking their kit and marching on the spot have barely room to bend over and tie their bootlaces. The new age slogan-branded portacabin sits next to a site going up and up and over the road another site going up and up and with the road the same width as it's always been, there's a massive wind tunnel in the making. When they cut the ribbons and open the sliding doors, I for one won't be on that cycle lane both for fear of road rage and the gathering of gusts from the sea.
But anyway, U + I, a new type of developer, according to its website. Which may be what attracted the council. So I took a look. 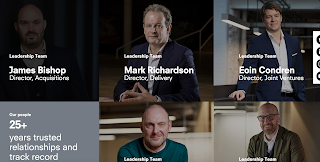 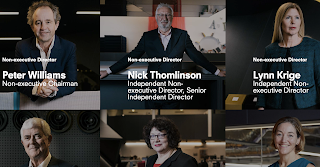 
Really? In this day and age?
Posted by Jackie Wills at 8:15 pm No comments: