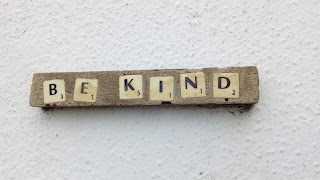 I was walking back after checking the sheep on Whitehawk Hill with Helen, who's a lookerer, and last week we were up there admiring a new lamb, possibly an hour or so old, finding its feet, eventually feeding, waiting for the farmer, as another ewe with a lamb moved closer to the new mother. We sat on a log, looked out towards the sea, shivered in the wind and realised how lucky we are.

This week, Helen had brought her binoculars to help her count the sheep better and there was a third lamb, like the one from last week, with sandy legs and face. On our way back I spotted the scrabble letters made into a sign and stuck to a wall near the racing stables. I don't know why it reminded me of a short story by Edna O'Brien about war. In it the violent death of a woman and family cow are linked, not in a crass way, but to explore sentience, kindness, whatever the absence of cruelty is...

Yesterday when I went with Bernadette to Crawley I had an idea it would be nice to visit Ardingly Reservoir, because I've never been. It's not easy to find, visitors not encouraged it seems and when you get there, activity not encouraged either. While children from the private schools splash around in their racing skiffs, canoes and yachts, the general public is left under no illusion - you are not welcome.

You also can't fail to notice the number of signs at the reservoir, which appears as a very large blue shape on the map, but which is not marked on the road and you're tempted to give up on the approach, there's so little information. You pass the private school and its prep school and the impression settles that this is all their land, nothing to do with the public, but you remind yourself this is South East Water, you are paying your water rates.....in your mind is the sign on the gate warning DON'T GET LOCKED IN as you bump into a car park and there's really very little encouragement to do anything except get back in the car and leave. We stagger up a slope, look at the grey water, the public footpath sign by the gate is knocked over and we get back into the car and drive away.
Posted by Jackie Wills at 9:20 am No comments:

Mavis Cheek's end of the millenium novel on sexual freedom

The dedication "to the honourable women and men of this planet who struggle and may fail but who nevertheless attempt the good" is a hint to the sweep of Mavis Cheek's thought provoking novel, Aunt Margaret's Lover, published in 1994.
I'm ashamed to admit it's the first of her novels I've read but I'll be looking for more because I couldn't put it down. It's not just that it's funny and modern, covering sexual politics and single parenting, but it's shot through with tragedy, a healthy loathing of the rich who collect art as an investment and a clear-eyed view of how we muddle through.
I am glad I refused to let a Daily Mail quote on the front cover put me off. There are several different covers for this book - QE1 is the one I found, but others highlight the personal ad much of the story's based on. I am glad I was so desperate to read something funny that I found Mavis Cheek. She knows about the art world - look at her website - and she is a champion of good writing as opposed to celebrity. There is a difference. In fact, she's a founder of "the Marlborough Literature Festival which aims to put authorship, rather than celebrity, back at the heart of literature festivals."

For that alone, I am on the verge of writing a fan letter. And because she has been a Royal Literary Fund fellow, I feel a sense of being in the same community, although certainly not at the same level.

I'm sure she has masses of fans and people who would be surprised how late I've discovered her, but I'll shout it here, she's one of the best. Aunt Margaret's Lover centres on a woman's hunt for a lover for a year, April to April. And it's superb. I won't be putting this back in the charity bag. Aunt Margaret is a self-taught picture framer, a woman who brings up a child alone, and she has informed views about the art world.

The novel's worth reading for one early scene at a gallery alone, when Aunt Margaret and a wealthy woman collector trying out her new electric wheelchair, disagree about Picasso's late etchings. These feature strongly in the novel too, adding a brilliant focus for commentary on people with money.

Ignore the reviews putting it in the category of light summer reading, it's furious, damning, complex, subversive and feminist and in a interview on her work, Cheek herself says, " I’m a feminist to my bones without even trying. Girls are doing brilliantly at school and university but that’s still not reflected in the balance of the world. Look at Zaha Hadid – who was virtually number one in a field of one so far as great women architects were concerned, and boy she paid for it."

She adds, "I’ve fought my battles over the years with The Great Unliberated Male – and I’m a little bit tired of it."

I haven't been as delighted or surprised by a novel for a long time. It seems to me there are women  expressing what matters who must be sought out.

Her website's fabulous, especially the bit about comedy women in print and how women writers are dismissed or sidelined, or their books are bought by men for their girlfriends, wives, sisters etc. etc.

Posted by Jackie Wills at 2:37 pm No comments:

Dervla Murphy, woman of the future

This morning the cat chirruped me awake at 5.30 so I reached over for the last pages of The Island That Dared, Dervla Murphy's account of three journeys to Cuba with her daughter and grandchildren and alone. It's a big book - more than 400 pages - but also creatively and intellectually. I found it in Saltdean, and Cuba's been on my mind - Risenga planned to go this summer but the musicians he was planning to meet recommended he put his trip off.

I first encountered Murphy's writing when I was teaching for the Open University and although I haven't read loads of her work, she captivated me in two of her African books, Cameroon with Egbert (John Murray 1990) and South from the Limpopo: travels through South Africa (John Murray 1997). It's the time of year to read about planting but at night I sleep most often to fiction. On the floor outside my bedroom sit Djuna Barnes, Tolstoy, Doris Lessing, Thomas Lynch, Anita Desai, Fadia Faquir, Toni Morrison, Hilary Mantel and Margaret Drabble.

After a lifetime, Murphy's a superb storyteller - 90 in November this year, her intellect, capacity for interpreting and understanding, shimmer in the pages of The Island That Dared. She feels like one of the last public figures to stand up for a way of life that is anti-consumerist, anti-corporation, pro-people. In her rare interviews she celebrates ordinary people, isolation, self-sufficiency. She's compassionate and different - a woman whose creative independence has to be essential to a viable human future.

When I read a while ago that she admired Freya Stark, I read Stark's The Minaret of Djam: An Excursion into Afghanistan (John Murray 1970). It was from Stark I learned about Churchill calling for the use of chemical weapons in the region. Murphy covers the use of chemical warfare in Cuba via dengue fever and swine fever. I find it almost impossible to imagine the isolation and courage of these women, travelling alone.

As I've come to the end of Murphy's three trips to Cuba, I've wondered about coincidences of thought, my interest in symbiotic relationships in the natural world. One of Murphy's themes in her Cuban journeys is how the country's poverty, self-sufficiency and emphasis on education and research has primed it to be a leader in sustainable living. As I read and later talked with Jane, I felt a deep grief for the future we are falling to - drugged by retail and hospitality we are allowing moneymen, loathsome and morally corrupt corporations to destroy its achievements.

I've been driving my writing towards optimism but struggle with how deeply embedded the absurdly monied have become to our thinking.  Murphy reveals the lengths Cuba's opponents went to to undermine socialism. But otherwise, in a rare Guardian interview in 2009, her advice to anyone wanting to travel becomes advice for life. While she's in no doubt travel of the kind she's done is long gone, she urges travellers to immerse themselves in the journey.

"Abandon your mobile phone, laptop, i-Pod and all such links to family, friends and work colleagues. Concentrate on where you are, deriving your entertainment from immediate stimuli, the tangible world around you," she advises.