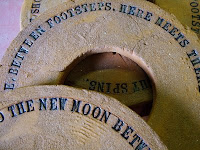 Tiles and picture by Julian Belmonte

This was a poem for a path....sometimes words work better off the page.
Posted by Jackie Wills at 10:57 pm No comments:

Magic realism and the kitchen floor

Snowdrops in the Pavilion gardens, but the best I've seen so far were in the garden of a student house this morning doing my daughter's paper round because she's ill. The bin bags set them off perfectly. A couple of yellow crocus in my front, no more yet and I'm feeling about as blank as the garden but excited by a new drive to abandon the first person in my writing, not this writing, obviously, but the poems. I've been attached to it for so long and wonder if I've been misusing the power of it, and certainly leading people to think that everything I write is autobiographical. This may be a mistake. It'll be sods law that when I decide that the first person is out of the window, poetry will find its way back to the kitchen and cleaning the floor will be all the rage again. But maybe if you spend your life cleaning the kitchen floor, it's not such a good idea to write about it, too. I'm drawn back to those magic realists and particularly Angela Carter and Amos Tutuola. They deserve re-reading. So I'm going to fling the pinny out of the back door and put on red riding hood's cloak.
Posted by Jackie Wills at 4:11 pm No comments:

"People tend to talk in terms of art for art's sake on the one hand, or art as a form of social engineering on the other. In fact the debate about the arts should be much more sophisticated than this; it has been going on since Plato's Republic, through Kant, the Enlightenment, Orwell, Leavis, Eliot and Williams." Sir Christopher Frayling has been moaning - "it's all a bit beer and skittles at the moment."

It's all very well to complain as you leave the top job at the Arts Council! I haven't been aware of a sophisticated debate being conducted by that institution. The bulletins I get in the post from the region (south) never cease to be tedious, worthy and predictable. Perhaps if there were some artists (a majority) on arts boards, there'd be a more interesting debate. Perhaps, too, if the arts council hadn't got rid of the specialists with vast experience of an artform, there'd be more challenging discussions, too about art.

You can talk more authoritatively about art if you know your subject through and through. I'm not interested in a debate about art if it has to be conducted within constraints that the arts council has promoted relentlessly, if it has to be conducted through arts council approved organisations, if it refuses to acknowledge the need to support individual artists, if it is squewed by interest groups.

When the arts council got rid of specialists, when it turned its back on individual artists, it hastened that dumbing down that he's so pissed off about. Where is the opportunity for poets, for example, to debate the role of poetry in this society? When did the arts council celebrate one of the most challenging of art forms?

But what does that "beer and skittles" insult mean? I don't think beer and skittles equates to dumbing down. I think it equates to the life most of us experience and where the debate needs to be held. How does poetry relate to our everyday experiences, what can it give us, how can it slot itself into those moments staring out of the kitchen window at the winter jasmine in the snow?

I'd say John O'Donoghue and I had a pretty sophisticated discussion about poetry and writing in the Park Crescent pub the other night. And about funding......John's new book, "Sectioned, a Life Interrupted" is launched on Friday. Buy it.
Posted by Jackie Wills at 8:14 am No comments:

Can a fine artist save Brighton Festival? 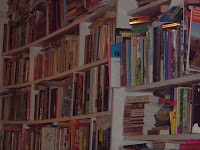 'A book is like a garden carried in a pocket.'

Everyone wants to make books. Artists and kids usually make them beautifully, as do dedicated, experienced printers with a love and knowledge of fonts. Limited edition or one off books are mouthwatering. Scrapbooks, photo albums, diaries, baby books, travel journals. When I was working for creative partnerships at Bourne School in Eastbourne for two terms, helping kids in years four and five write poems, I ended my residency with a session on making hand-sewn pamphlets for their work. I'm nowhere near as good as someone who makes artist books, but stitching a little eight page pamphlet is simple and if you use quality paper it feels substantial. The kids loved their books - their first collections of poems, illustrated too - and in their own way were tiptoeing in the footsteps of that master of artist books: William Blake.

Then there are celebrity books. My daughter's heat magazine was the only thing to read on the kitchen table this morning, other than a problem page on infidelity by Virginia Ironside. Four pages on 'the crazy world of Pete Doherty'. And a photo of Pete, dressed in fetching Byronic pastiche, signing copies of his book: The Books of Albion - the Collected Writings of Pete Doherty. I remembered the turning point in literature festivals a few years back. Brighton festival had a wonderful programmer - a guy called Adrian who put on Derek Walcott, Sharon Olds, CK Williams and many more astonishing poets. He packed out 100 seater venues with poetry.

Blake's Visions of the Daughter's of Albion was a radical, political tract condemning treatment of women and slavery. And he was an awkward, troubled man. I'd love to think of Blake wandering down the coast from his Felpham retreat, to do a reading at the Brighton festival, looking out at the sea where he imagined visions of his literary heroes. But try as I may, I can't make it work. Wordsworth wrote about Blake: "There was no doubt that this poor man was mad, but there is something in his madness which interests me more than the sanity of Lord Byron and Walter Scott." I wonder if Wordworth was as irritated by the easy targets in Don Juan as I am sometimes, especially that line towards the beginning, "At fifty, love for love is rare, tis true...." His arrogance is utterly contemporary.

Brighton festival launches on February 18. The guest director is Anish Kapoor. In publicity about his appointment there was nothing about literature - the four strands of the festival, it seems, are dance, theatre, music and debate. Can we have faith that a fine artist will dig deeper? Will the chattering classes ever be halted?
Posted by Jackie Wills at 9:38 am No comments: