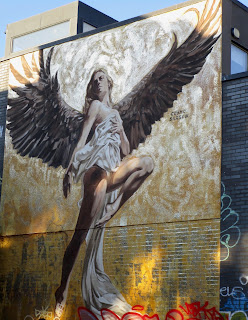 Starlings, sunsets and a multi-storey angel are what the days between 2018 and 2019 seem to demand.

I swing between fidgeting and slumping, between being full of great intentions and grim thoughts dragging me back to the past like a stalker.

At four this afternoon the cat was purring on the bed next to me and I was dozing off.

I have five books on the chest of drawers - three borrowed, two from charity shops. I am dipping in and out as if I'm on a summer beach.

These days remind me of the mercury we let run onto the floor, between the boards, in the school science lab.

Bobbles of it rolling away, shinier than anything.
Posted by Jackie Wills at 9:54 pm No comments:

The snowy past and its answering voice 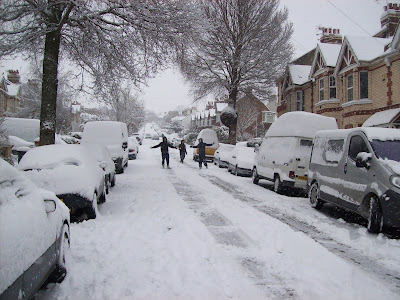 When the snow came that year it was thick and marvellous. The teenagers became children again, knocking on each others' doors as soon as it was light, reclaiming the road which was more or less impassable, although some tried and slid sideways into junctions and kerbs.
Tove Janssen reminded me of it as the autumn turned with her story, Snow, describing how snow changes the light, changes sound, turns us into hibernating bears. Dylan Thomas reminded me of it last week in his story, A Child's Christmas in Wales, which remembers throwing snowballs at cats, singing carols to an empty house and hearing a faint answering voice through the keyhole.
I am reading these stories in a Reading Round group for young people who have mental health problems, hoping to provide an hour in which something eases.
That faint answering voice is in this photo somewhere, behind one door, perhaps my future door. The past is so present right now as my adult children move into the next phases of their lives, one clearing out childhood's shoe boxes full of stones and essays, giving away hats that once were as powerful as crowns, the other looking over the water and finding work after years of study.
I hear the answering voice as I collect belongings, help bag them up, help store them away for now. I find myself clearing out cupboards and being ruthless with cobwebs, wondering about painting the kitchen and about the pile of plastic boxes I've accumulated.
This mild December, the borage, fushia and calendula are still flowering, rain has stuck the windows shut and expanded doors.
Rain light doesn't encourage me to fantasies of hibernation but it does draw me to the windows, to the sun when it comes, to the sky at 4pm and the surprise of stars when clouds clear.
It is always a case of standing at a door or window and singing, to hear that faint answering voice, isn't it, understanding the voice isn't just from the past.
Royal Literary Fund Reading Round
Dylan Thomas reads A Child's Christmas in Wales
Tove Janssen's A Winter Book

Posted by Jackie Wills at 9:51 am No comments: