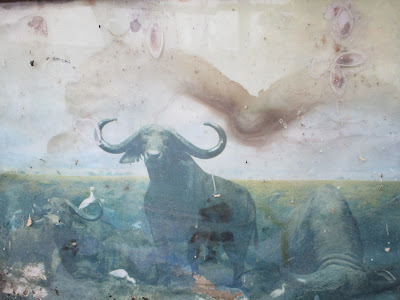 I don't know how this watermarked print of buffalo ended up in my allotment shed. Behind the glass, somehow, seed casings, the sky stained by rain. It's been in the shed since the children were little, perhaps I brought it from the house, unable to throw it away. The flat, distant background is unlike any of the places I've seen buffalo - in the Kruger National Park, in woodland. And those were different buffalo, perhaps, with a harder, lumpier head, less graceful curve of the horns.

But the stain, the seeds, the reflection in the glass and the dust on the glass, all seem to lift the trio of buffalo into a more heavenly dimension, so this is no longer a print but a collaboration between the original painter, the printmaker, the framer, time and circumstance. 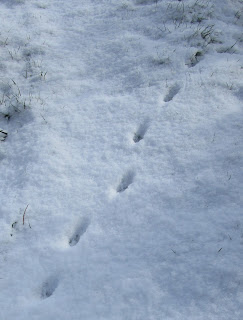 Likewise, the print made by a fox on the allotment in our days of snow - a series of hyphens by the plum tree drawing the line between me and it, night and day, between life in houses and life outside.

And it leads me to the memory of a sunny evening when a young fox sat down on the path and I carried on weeding, talking to it as I would to a child.

But doesn't every encounter with a fox build into a story that compels you to describe its skinny, careful legs, its big white tipped tail, its athlete's leap over the wall?

I think of the cub that fell into the window well, its mother's screams, the cat's astonishment as it ran towards the back door, hid behind the fridge, how Justine and I strained to release it at 3am because she'd also been woken by the vixen's distress, how I hope it found her when it ran back into the night. 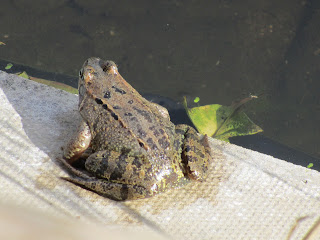 I think of the older cub, shivering in the same window well all night until I heard its scratching and managed to cover it with a blanket. It was so cold, it let me carry it to the cemetery without any fear, let me put it down between gravestones in the tall grass behind my house and it almost didn't want to give up the warmth of the blanket. I had to shake a corner of it to encourage it away from the night anticipating its death.

And in a pond to the other side of Rob's plot, on a sunny false spring afternoon, a survivor of the snow and ice dragged itself up from the bottom for a little warmth.

I look past it to the pale and splayed shapes of the dead and bloated, trapped under thick ice and wonder how it survived. Watermarks, a pile of logs, a pink blanket printed with paw marks...our signs of life.

Three and a half days 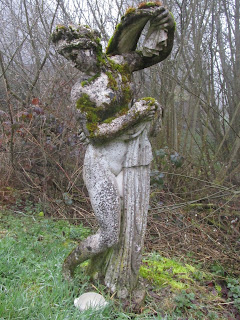 Whose is this begging bowl and what could a woman want from the mist? That's the 14 word 'hurst' poem I wrote at the beginning of the month when I had three and a half days away in Shropshire on an Arvon Foundation tutors' course.

My begging bowl was full - half the course fee was paid by the Open University for professional development. What I wanted from the mist, which didn't lift from Tuesday to Friday morning, was, well, blank pages.

By that I mean I needed to fill pages, which I haven't been doing. So why not try a short story. And in those three days, yes, I did and I cut it by a quarter. It felt good to cut. It felt nervewracking to read it aloud. Pregnant woman with swan - it's the title of a print by Joseph Beuys.

In those days at the Hurst, on the border of England and Wales, a house surrounded by trees, I walked in the morning or afternoon. The woods were noisy with chainsaws on one day, wet and streaming every day, busy with birds on another day. I found a line of nesting boxes like terraced houses, I found the Hurst's monkey puzzle tree and its redwoods. 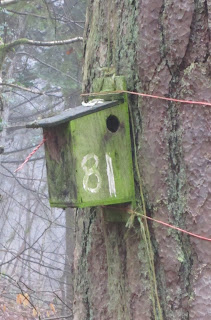 In the verges, wild strawberries were in bud but everything else was two weeks behind Brighton. By the pond, there was a carpet of ransoms.

Three and a half days go by quickly. Four breakfasts, four nights sleep. But the tutors, Ann Sansom and Chris Wakling worked us hard, set us off on endless writing threads, shared ideas for tutoring - filling what space was left in the begging bowl.

There was no internet, limited phone reception. At the end of the week, I went to Subway in Craven Arms before my train to pick up emails. I'd missed nothing much.

In three and a half days the food I left in the fridge at home wasn't even off. There was one letter on the table. A couple of missed calls.

I came home with a short story on a memory stick and three and a half days of ideas I may go back to, but don't feel I have to. They came, after all, from looking into the mist.

Posted by Jackie Wills at 11:03 am No comments: