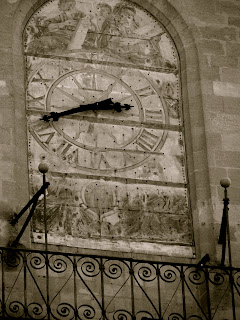 I began working as a journalist in 1978 immediately I finished my degree and I was lucky to find a job so quickly. Lucky, as well, to have been working ever since virtually constantly. I totted the years up  - 32 of them and all spent writing or, more recently, encouraging others to.
Most of my working life I've been freelance. It's allowed me a four day week, even less, from time to time. It allows me to put washing in the machine while I'm working at home, be around at the end of a school or college day.
The downside is no paid holidays, time off sick and - an issue that may seem a luxury - no paid time to experiment. I gave myself three months this summer to concentrate on poetry and now I want more. It was overdue but I want more of it. In 32 years I've had just one other equivalent block of time, in my 30s, when I spent a summer in France after a relationship ended. The only other work breaks were when I had my children - I could afford about 4 months when I had my son, 5 when I had my daughter.
I wish I could convince myself that it's unreasonable to expect more, that the freedom I've had freelancing more than makes up for the absence of a pension and retirement time. I wish I could use scraps of time better.
But there is no substitute for prolonged thinking time, for what it can yield and the opportunity it offers for chasing a hunch, for daydreaming, for experimenting.
Someone once told me I should write down what I wanted. This is my desire. To find a way of funding six months uninterrupted by work of any kind to write more of the poems that emerged in the summer.
Posted by Jackie Wills at 11:45 am No comments: