More words for women than anyone can imagine 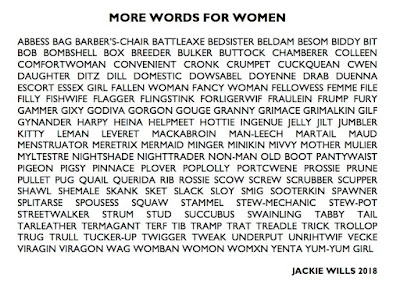 I've been collecting them for ever, since I discovered the Historical Thesaurus online and read it voraciously, gathered synonyms for 'woman' from there and other sources and put them together in a kind of word search format, on a postcard. There were no gaps between the words. Perhaps I felt embarrassed by the sheer misogyny they illustrated collectively, despite the loving, respectful and sweet words, which I wanted to put in too.

Recently I've been bothered by social media viciousness, by an unfettered resurgence of misogyny, enabled by the politically naive and by cowardice. My upbringing, my political education emphasised mutual respect. Yes, I'm as flawed as you, but I believe in debate and as a writer, respect for people, for the languages we speak, for how we communicate, for differences we have. Dr Seuss, among others, is good on the insanity of wars about differences between us. When I put the first Words for women together, I wasn't sure how to define it. Not a poem, although it eventually went in Woman's Head as Jug. Not prose. There's no narrative.  It went into Binders Full of Women, the publication that was assembled when another US politican made an incendiary sexist remark. 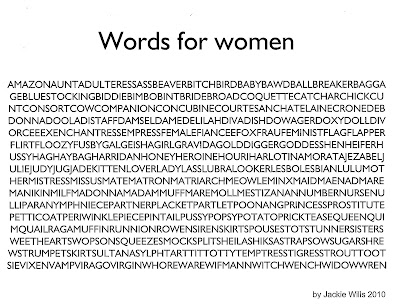 I feel the words being used against women now need to be more visible, less cryptic than a word search and so there are spaces between them in my latest version. The spaces represent hundreds of years of thought, abuse, love and hate. These are just the words in English and my lists are not comprehensive. They don't include swathes of slang from US or Australian English or from English spoken elsewhere in the world.

I'm no academic and wish I'd concentrated more in linguistics lectures when I was doing a degree. I have the Royal Literary  Fund to thank, in part, for the first Words for women, which germinated during a fellowship at the University of Surrey. My office was tucked away, the librarians didn't rush to promote what I was doing so I had time to browse the library. I found the linguistics section. There are so many lives I might have had and these shelves held one of them. But rather than regret, what came out of it was a card, imperfect, nearly in alphabetical order, of synonyms. My open mouth.

Last night I went through my lists, ticking and adding. They need to be read together. The font on the most recent is Gil Sans MT. There are synonyms for girl, for prostitute, for mistress and old woman here. The oldest word is from Old English. Let's take care.
Posted by Jackie Wills at 10:50 am No comments:

Email ThisBlogThis!Share to TwitterShare to FacebookShare to Pinterest
Labels: Woman's Head as Jug, words for women

The bass says more than words can

Nick Makoha's poems have been attracting attention in the UK for some time and rightly so. US poet Terrance Hayes says they 'animate in the space between story and song' and his work is an important contribution to British contemporary writing.

On the last morning of Winchester Poetry Festival, Makoha was reading with Karen McCarthy Woolf, who's also established a reputation for emotionally demanding material. The third poet, Katharine Towers, was shortlisted for the 2016 TS Eliot prize for her second collection The Remedies.

And the readings complemented one another perfectly - Makoha's are direct, sometimes hard to hear because of the violence they describe but they carry a sense of history needing to be channeled. McCarthy Woolf's are more personal, sometimes hard to access, fluid and uncompromising, while Towers stays in the natural world, her boundaries firmly established, the metaphorical landscape more familiar but still imaginatively sharp.

As I drank coffee I realised that this festival had a markedly different line-up to those I've been used to. And since counting the representation of women and other so-called minorities was good enough for Tillie Olsen, I did a count of the writers appearing at Winchester. It worked out well - about a third of participants were poets of colour and women (for once) outnumbered men. 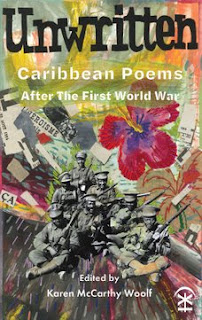 Makoha said he wanted to stop feeling embarrassed at being Ugandan in an English space and McCarthy Woolf turned the language used to disparage migrants on its head with her poem telling the migrant narrative in the language of the super rich. She has edited a collection for Nine Arches Press, Unwritten, about the citizens of empire who faced racism despite their willingness to fight for Britain in WW1.

McCarthy Woolf's own poem for this unique anthology weaves three narratives in an almost documentary way. Later a Modern Poetry in Translation session, Profound Pyromania, explored the plurality of languages in Caribbean poetry, placing it far from the colonial centre of empire, as Vahni Capildeo put it.

Ishion Hutchinson went deeper into the influence of Lee Scratch Perry on his writing, explaining that dub had preserved the west African languages introduced into the Caribbean by the slave trade. Hutchinson explained Scratch Perry showed how music, particularly the bass, became a different kind of transport - away from daily life. Dub encapsulated the horror of the slave experience in a way words couldn't, said Hutchinson. Dance became a lamented joy, a journey through horror and a listener was overtaken by dub's deep oceanic sound.

Caroline Bird has had five collections published and she's only 32. The most recent, In These Days of Prohibition, came out last year. To my shame, although she's a regular performer, I've never seen Bird live and I was knocked out. It's her professionalism combined with her honesty, a sense of generosity of spirit that is perhaps a side-effect of her astonishing poems - she has a surreal, unfettered view of life, but also a deep humanity.

If I went to Winchester feeling a bit tired of poetry and wondering if it was relevant, I left in no doubt because there are these amazing writers putting life under the microscope and not giving up on the challenge to express what needs to be said, both personally and politically.

Posted by Jackie Wills at 1:21 pm No comments:

Whose land is our land?