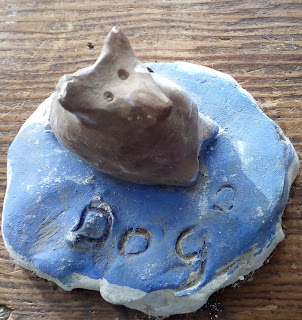 It looks up at me and I wonder how I thought I could bin it. I don't know which of my two children made it, but it has survived in the glass cabinet on the landing.
The cabinet houses placeless things - a candle from Nelson Mandela's 80th birthday cake, nursery school handprints, a bunch of door keys, spidermen, Barbies, three tiny lead toys my aunt had as a child and two silver coins I found in the fireplace when we moved in.
When my last reading group stopped a couple of weeks ago, I was released into proper retirement. I began to think about how artists (writers, musicians, photographers, painters etc. etc) have been distracted by the X Factor effect, needing to be a winner. How our job is not to produce all the time, or win, but to make, to practice, trust time spent doing (apparently) nothing, trust instinct.
Rob Hamberger was round last night and we talked about Jane Campion's The Power of the Dog, her hidden clues. A couple of days ago I walked Polly, my friend's dog, through Queen's Park, onto the beach where we met Luca and her owners (photographing her with an old 35 m). I dropped round to Annie's on the way back, sat on her steps and talked until the dog demanded we go.
I wake up without dread, answer to no-one. I've made marzipan, Christmas cake, vegan mincemeat, tea cosies. I've ironed table cloths and watched squirrels on the back garden fence. I've thought about the fox in my jumpers that night.  I've begun speaking French again thanks to Sian.
Posted by Jackie Wills at 10:45 am No comments: