When a stupid man is doing something he is ashamed of, he always declares that it is his duty - George Bernard Shaw 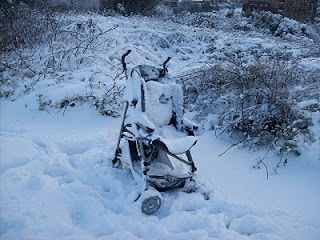 Here is my letter to Brighton and Hove Council after watching councillor Geoffrey Theobald defend the local authority's neglect of its citizens.

Dear Mr Theobald and members of Brighton and Hove Council,

Mr Theobald's defence on television last night of the local authority's response to the snow in Brighton since last Thursday was astonishing. Yesterday I made a complaint to the council about the state of the pavements and Mr Theobald's comments made me wonder if we live in the same city.

This is my experience of Brighton and Hove Council's response to the conditions we have had to live with.

I live in Hartington Road, a designated emergency route. It is a long hill running from Lewes Road to the top of Elm Grove. Most of the street on the first day of snow impassable. By Friday several side streets became blocked by sideways-on cars or lorries that had tried to move and become stuck.

There was no pre-gritting. Our road was eventually visited by a gritting van at about 5 on Sunday afternoon. I went out shortly afterwards. There was no grit on the road so perhaps it was just going home or putting on a show? That is the only evidence of council activity I have witnessed since the snow began to fall.

I had no need or desire to use my car and was perfectly prepared to walk everywhere, which I did, but with great difficulty. Every pavement in this area, along Lewes Road, across the Level and into the centre of town, or to the station, was like an ice rink. I walked to Brighton station on Friday and it took me an hour because the pavements were so dangerous. It would normally take me 25 minutes max.

On Saturday, I decided to walk to the marina. I went up Elm Grove and over the racecourse, down through Whitehawk. There is a long path into Whitehawk from the racecourse and as I walked down, keeping to the snow and off the path, there was an elderly woman with a shopping trolley desperately trying to get down too. As I and my daughter guided her, we arrived at the bottom of what was more like a toboggan run than a path. It was a sheet of ice and the ice continued until we arrived at the road. How the council could have allowed this path to remain ungritted strikes me as criminally irresponsible.

I wonder if Mr Theobald and officers of the council have attempted to walk anywhere, or perhaps they have restricted themselves to the parts of the city that have been gritted or perhaps they have travelled by car? Last night, (Monday) when the snow started to melt, there was a police officer in my street who tried to walk on the pavements, no doubt attempting to put into practice the official advice not to walk in the roads. Obviously, he had to abandon his attempts and joined the rest of us in the middle of the street.

My questions to each member of Brighton and Hove council are:

1. why were such dangerous conditions not responded to effectively?
2. has the local authority broken the law through its negligence?
3. why were council workers not working to clear the pavements?
4. why weren't members out in their wards with grit and shovels?
5. how exactly do you justify the level of incompetence that residents of the city have experienced?
6. who will pay if there are injury claims against the council - because I am not prepared for those claims to be included in my council tax.
7. when young people are next demonised for anti-social behaviour, can we perhaps remember how many local residents have been put in real danger by the irresponsibility of this local authority. For the last four days, the local authority has shown itself to be incapable of running the city. 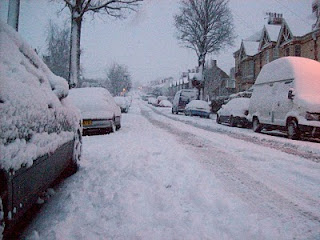 Morning Friday December 18
Posted by Jackie Wills at 10:54 am No comments:

Snow and no to Tesco 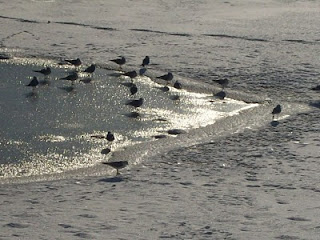 Yes, snow changes everything. I walked over the racecourse to look for a Christmas tree - Wyevale had nothing below £40, Asda at the Marina had sold out, the Open Market prices started at £35. Price fixing all round.....even the lovely Turkish grocer's at the bottom of my road had upped its prices by around 200% from last year. I found one for £20, much against my better judgement and lugged it home on my head since the car's frozen to the ground.

It was quite literally a slide down to Asda from Wyevale, over the racecourse, down into Whitehawk. Our utterly irresponsible council - Brighton and Hove - barely deserves the title given its complete disregard for anyone's safety. Every pavement is a sheet of ice, and Brighton is a hilly place. But the path down into Whitehawk is like an Olympic toboggan run, smoothed to perfection by the limbs of elderly residents and their shopping trolleys as they slide ever downward.

I cleared the pavement in front of my house but no-one else saw the need. A man was clearing the pavement by the community garden on Lewes Road as the police attended yet another accident in a side street opposite. Virtually every street off mine is blocked by some lunatic who tried to drive. A fire doesn't bear thinking about.

But it's clearly not the council's concern. No grit in sight. Last night I spotted my first gritting van speeding up the road with its lights flashing. When I went outside to walk to a friend's I wondered what it had been spraying. There was no evidence of grit. Perhaps it was trying to persuade the city's population the council was doing something.

However, on to Tesco. 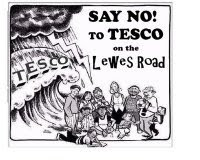 We have a beautiful, now frosty, community garden in Lewes Road that used to be a derelict petrol station. It's right next to a very handy Co-op that's been doing a good job for years, and opposite a Spar. Tesco apparently wants to open up here. We don't want Tesco and its bullying imperialism. Let's remember its attempt to silence criticism in Thailand by taking a local journalist to court. Let's remember its profits this year and question how they were arrived at. Tesco attempting to set up in Lewes Road is a blatant attempt to close both the Co-op and any other local business. It should not be allowed to happen. 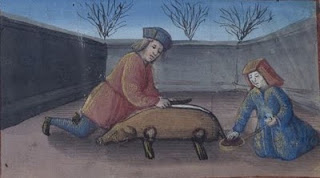 Posted by Jackie Wills at 8:42 am No comments:

Carol Ann Duffy is on form

There was never any doubt that Carol Ann Duffy was a brilliant choice as Poet Laureate and her poem for the 12 days of Christmas is total affirmation of her appointment. How else would such politically challenging material make it into the Radio Times?

Duffy is putting poetry at the centre of the arts again. It's fantastic she was chosen to hand over the Turner prize, that she's rising to these commissions with such skill, that she's writing what needs to be repeated.....what better place than a seasonal TV guide which will be in almost every home in the UK.

I hadn't read her poem first thing this morning. There I was driving into Guildford listening to Radio 4 and discussion about bankers' bonuses/executive pay, feeling utterly disenfranchised. There was never a point in my life when I remember agreeing to deepen the divide between rich and poor. I thought when I supported Labour, it was for change, imagining Labour had learned from Ken.

Ken was on this morning. I cheered up when he said 'good riddance' to bankers leaving for more money elsewhere. I've never heard a good argument for bonuses or tips either. They're like pocket money for household chores, aren't they?

Like Ken, Carol Ann Duffy's bringing what's said in the margins into the mainstream again and reminding poets of their responsibilities, too.
Posted by Jackie Wills at 10:14 am No comments: