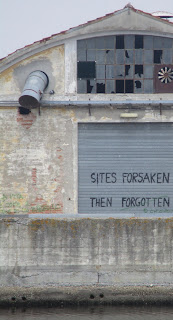 I nearly cried when I saw Ron Finley's TED talk, shared by someone on Facebook, describing the food desert of the district he lives in, the endemic bodily sickness of people who barely see a vegetable and when I heard him describe his gardening as graffiti.

I think of the power invested in people who are generally remembered as big thinkers, the people who transform landscapes, like Capability Brown, who stock glasshouses with orchids, who re-wild acres of land they've had the money to buy....I think of most of us, the lucky ones with a square of garden, others with balconies and pots, others with nothing but a strip of grass and where I live, that's being parked on.

I think of the women who hold the secrets of growing everywhere in the world where this still happens, where it's not a hobby but a necessity and I think of my daughter watering pots of seeds in the nursery where she works, the kids' delight as they grow.

And Ron Finley, describing gardening in the city as defiance. If kids grow kale, kids eat kale, he says. I thought of the pathetic planters on Lewes Road and abandoned, unlet allotments at Tenantry Down. We need people like Finley to remind us of what's right, of what can be done with energy and drive.

It's not guerrilla gardening, but up the hill the community orchard continues to grow.

The questions for each city or urban area will be different, but in Brighton green spaces are seriously under threat from building, parking and strimming. Can we change? Can we make gardening radical and real, not just rhetoric?
Posted by Jackie Wills at 5:20 pm 1 comment:

Happiness or a contract with gossip?

My birthday hangs around blue Monday like the last fruit on the tree, apples clinging to bare branches by the roadside. And I've often felt grim in January and February, although much less so since a friend lent me a sun lamp a few years back and I realised that was the solution - get outside on sunny days, be in the daylight.

It's easier now I'm semi-retired. I can go out when I like, more or less. And every Thursday I have a trip to Haywards Heath where I run a reading group for young people in Chalkhill.

This work has been essential income, but also essential to how I think about writing. Stuck in bed with a cold and cough for a couple of days, I took some time to try and find more material to read these young people. I want uplifting stories and poems. I want writing that takes them away from the dark rectangle in their palms they've grown up with, that awful tunnel of judgment, misery and despair, from criticism and pettiness, from bullying.

Uplifting. It should be easy, surely? And yet I'll be half way through a story and it turns, or the language changes and the 'fucks' and 'fucking' comes in. I'm no prude, I don't mind it too much, but I can't read it aloud to young teenagers. It's not allowed.

There are few short stories for teenagers, I've realised, that allow them to escape. Publishers seem to think teenagers need to read about bullying, abuse, suicide, self-harm, sex, dysfunctional families, harm to animals, you name it. I'm sounding old fashioned. But there's a difference between acknowledging problems exist and picking at scabs.

An example: Becoming Dinah by Kit de Waal. I read extracts from this new novel for teenagers and it is gripping. This is fantastic writing by a woman who knows what she's doing. I wish she wrote short stories, but I'll go with this. Michael Morpurgo, David Almond, Malorie Blackman....

When I asked on Facebook I wasn't sure if people got what I was asking for. Uplifting? Why? And what is uplifting? It's hard to define. Here are some of the short stories I've read which I felt went some way towards expressing an insight I was looking for, into whatever we mean by happiness or contentment, a moment with our spirits rather than being trapped in the dark glass rectangle of a contract with gossip and damage.

Tove Jansson stories -including The magic forest and Snow

The Enchanted Morning by Malachi Whittaker

Writ and Last by Ali Smith

A Child's Christmas in Wales by Dylan Thomas

Moths of the New World by Audrey Niffenegger

The Toilet by Gcina Mhlope

Boy in a Ford by Hugh Atkinson

May Malone by David Almond

Through the tunnel by Doris Lessing

A weight problem by Elspeth Davie

Posted by Jackie Wills at 11:10 am No comments:

Fame, patriarchy, capitalism and everything else that's wrong

I spotted this little broadsheet in the background of a film on a rich and famous internet billionaire who lived in his office high above one of the world's megacities. It was like seeing a rare moth being pinned to a piece of card - a sentiment appropriated for its font and design.
Those of us brought up to describe the glass as half full, to appreciate the luck and privilege of our birth, have been too anxious in recent years to be nice. I trace my own awareness of this overwhelming positivity to 2000 when I worked as a poet in Unilever.
My cynicism was not nice in that environment where 'no' and 'but' were banned in favour of 'yes, let's build on that'....my attitude was as bad as my bad teeth - socially embarrassing.
And I knew this. It's why I stayed in the corner at parties. I never mastered the wit, irony, joshing (a public school term) that determines who may enter the club and who won't.
But truth be told, I was conned.
While I'm washing out baked bean tins in every weather, nothing's changing.
Fame determines who gets honours, money and work.
Patriarchy determines who gets the same. Oh come on, you know. I don't need to explain.
Capitalism is simple. No, you can't gather wood, you have to buy it from me. No, you can't put a shack in that wood, you're trespassing. No, animals aren't sentient they are raw material. If I build a factory here, I have the right to bottle and sell that water, to empty my shit into that water, to divert that water, to drain and dam that water.
You work for me. I decide what I pay.
What was that you said, yes? Or did you argue? 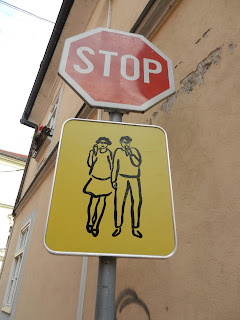 I am increasingly exhausted by trying to do the right thing, to be reasonable, to hear both sides. I am sometimes exhausted by living on next to nothing, by being invisible because I am not famous. By spending seven years on a book of poems that won't sell more than 500 copies.
Yes, of course, what matters is family, a roof, a patch of land to grow fruit and vegetables, a cat who purrs at me, being able to pay for the electricity.
But I am part of society, despite Thatcher's greatest efforts all those years ago, and yes, I want to be part of society and to believe those of us without power, influence and means can be heard.
Let's celebrate those who are ignored, who are good at what they do, who have been improving their art, writing, musicianship for decades, let's look up to people for their stamina, belief in the craft, for their quietness (often), for integrity.
Can we?

Posted by Jackie Wills at 10:51 am No comments: 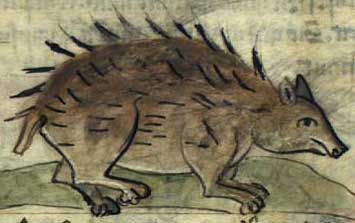 A local garden centre sorted out the summer's seeds for me in the gap between Christmas and New Year, with a 50% off sale. I bought handfuls, from purple kale to sunflowers, tomatoes, beetroot, beans.
At the allotment yesterday the wren was in full song, the robin hopeful of worms as I weeded and cut back raspberry canes.
It has become vital work to grow what I can, to be kind to the small patch I have and enable wildlife to live as it should, without the threats modern life has brought. At friends' houses this year so many conversations were about what we can do. About individuals shifting our focus from jobs to the environment.
Hedgehogs, insects, bees...the threats to wildlife are within our control - petrol-powered strimmers, petrol-powered leaf blowers, chemical-based insecticides/pesticides/weed killers.
Can we transform more open spaces like cemeteries, verges, patches of grassland into meadows?
Not if there is an obsession with cutting back to bare earth, not if cars are allowed to park on every open space, not if we resist conversations about quality of life in cities.
The German government is banning leaf blowers, Farmer's Weekly is promoting a switch to quieter, battery powered strimmers, the RSPCA is urging gardeners to think again before using lethal power tools, hedgehog rescue  wants strimmer operators to be aware of the damage they do.
Would that this was a year of quiet, when power tools are silenced. 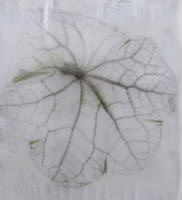 On my way to B&Q before Christmas I stood and watched two men with leaf blowers on a basket ball court attempting to blow leaves through a gate onto a verge. The wind blew the leaves one way, the men followed with their blowers. A couple of brushes would have been quick and silent. They were working for Brighton and Hove Council. Turned up in a petrol guzzling van. Used petrol to battle the wind.
I have been told that if I don't want to put up with strimming noise on my allotment I should wear noise-cancelling headphones. What have we become, when that is seen as acceptable advice? With so many green councillors now, can our city be brave?
Posted by Jackie Wills at 1:28 pm No comments: