What can a doctor learn from a vet? Cats, appointments and waiting rooms... 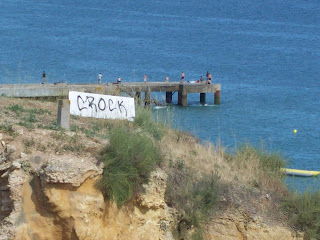 This mysterious graffiti appeared overnight on the sandy cliff at the end of the tiny road I was staying in for a week in Albufeira. At night, the cats wandered around on this precarious stretch of wasteland with its sheer drop to the beach. Netting attached to the base of the cliffs bulges with rubble and for the first time I saw a cat on a beach, stalking a small bird......

So the day after returning from Portugal my daughter goes down with the shits and is in real pain for two and a half days/three nights.

Now, it's easier to get an appointment for our cat to see the vet than it is to see a GP at our surgery. The system works like this - the phone lines open at 8.30 am and you sit with automatic redial immediately they open if you want to stand a chance of seeing a doctor.

I got through at 8.40 am and there was just one appointment left in the afternoon. Is that any good for someone who's been gasping with pain for the last two nights?

I don't know how many people our five GPs attempt to look after. It's probably thousands. I don't know, either, how much they earn because I can't find it out or find a way of looking for it.....but a friend told me recently that most Brighton NHS GPs who are in their own practice are earning at least £100,000 a year. I wonder if they have to file public accounts?

It's not good enough. The last time I was in the surgery, with my daughter, for a vaccination booster, the place was dead. It was more hushed and bereft of natural light than the church down the road. It doesn't add up. Receptionists chat behind the counter, the tv screen's silent and the sick public is kept as far away as is humanly possible, treated with contempt, suspicion and condescension.

By contrast, at the vet's there's a healthy and ongoing dialogue between friendly receptionists and cats, dogs, rabbits or budgies in the waiting room......there is natural light from the large windows onto the car park and a sense of helpfulness.
Posted by Jackie Wills at 10:02 am No comments: