The racehorses were at the far end of the ridge on Sheepcote valley, above the coast road when I was halfway through my walk this morning. I crossed over from the clumpy grass, a lark above me, onto the golf course so I could watch as they passed.
This is another of the free pleasures of this place if you're up and out early enough. In the university holidays I need a routine and walking Roxy is my incentive to leave the house before hours at my desk. Walkers in the morning are brisk and there are fewer of us. In the afternoons people stroll, sit on benches and recently I've encountered a couple of men with the six of the biggest dogs, other than great danes, I think I've seen - most of them black, one chocolate brown, they're the size of shetland ponies. Roxy skirts around them nervously, keeping close to me until she's past them and then shoots off at speed up the path.
The earth is cracked, the puddles have dried up and this preview of summer feels too good to be true. But even when it's hot enough for bare arms, it still doesn't smell of or sound like summer.
Posted by Jackie Wills at 10:08 am No comments:

The sheep are gone from Sheepcote Valley - they've been in occupation for a few weeks, but now it's bare apart from wool snagged on the brambles. Crows and magpies are ever present but the hawthorn's out and I saw my first violet hidden by a path weeks ago. The valley goes through two stark changes of colour once the hawthorn comes out - a swathe of cream when the cow parsley blossoms, blue when the creeping bellflower appears on the slope.
Sheepcote valley doesn't look much but it stretches over 220 acres. It's a Site of Nature Conservation Interest and part of the South Downs National Park which protect it from development.
It's also famous as a breeding ground for skylarks. People used to eat larks - in fact lark-catching wasn't banned until 1931. Brighton and the Sussex Downs were hunting grounds for a 19th century trade that delivered as many as 40,000 larks a day to Leadenhall market in London.
The larks are one of the greatest free pleasures of a walk in Sheepcote Valley. The other is the view of the sea - grey, blue, black, silver and once I saw a chemical yellow hung on the horizon. But I'm as delighted by the racehorses exercising along the gallops on the ridge as I am by the larks and although I loathe the idea of birds in captivity, it's thrilling to see the bird man exercising an eagle or owl.
According to the friends of Sheepcote valley, all year round residents of this scrappy, untidy place are green woodpeckers, meadow pipits, stonechats, blackbirds and flocks of goldfinches and linnets with their jerky flight. Wagtails like the puddles and the hunting birds are kestrels and sparrowhawks.
Visiting birds - wheatears, black redstarts, common redstarts, spotted and pied flycatchers, whitethroats, willow warblers, dunnocks and greenfinches. Sheepcote is first landfall in April and May for swallows, house and sand martins and swifts after the Channel.
Summer's also a time for the travellers to pitch up off Wilson's Avenue at the top - they come in waves. And one year there were a couple of caravans of rabbit catchers with their noisy caged terriers.
The official line on Sheepcote Valley's environmental significance is "interest almost entirely lies in its early successional stage wildlife – ‘arable weeds,’ which need disturbed ground (like venus’s looking glass), open chalk grassland (which the bee orchids and the famous swarms of creeping bellflower need), and ground nesting birds (skylarks and meadow pipits)."
It's an unlikely paradise, but when the elder flowers are out, there can't be a sweeter smelling place - and that won't be long now.

Posted by Jackie Wills at 10:42 am No comments: 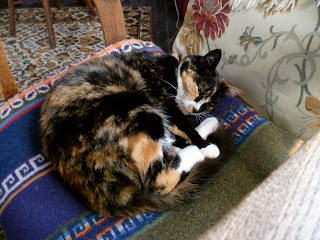 The fuschia in my front garden has grown so tall that the top branches nearly reach my bedroom window so the cat sits on my desk when I'm working and tenses whenever a bluetit or sparrow lands. Next door's two big fluffy cats also sit in the upstairs bay and quite often nowadays there's a cat standoff. Tiger growls in that unearthly cat way and stretches her neck and the neighbour's cats put their front paws onto the window ledge and stare. When my blind's down, Tiger scratches at it until she can see the window, so my desk is now covered in cat hair since she's also moulting. The presence of cats next door since the beginning of the winter has stopped her hunting because she's so nervous about being invaded and is always being chased out of the garden. I found one of the two asleep on a groundsheet in the shed the other day but mostly it comes into our house so there's even more fur to hoover up. Tiger, or alternatively Queen of Cats, is consequently my constant companion. I feel like a large protector, but my daughter gets cross when I say that because that means a shift in allegiance from her to Tiger. Anyway, next door's cats, delightful as they may be, are now Bully Cats. We have not seen any more of the black and white one (Psycho Cat) that tried to hide by standing on its head behind a chest of drawers in my daughter's room. When I lived in Campbell Road, the cat next door was one of seven and was a terrible thief. One night it did an enormous number of runs in and out of my kitchen window with a bag of onions, three pairs of knickers, several socks and a tee shirt. When I went next door to collect them from the garden, its owner brought out a box of jewellery and told me it had once managed to bring a mop through her cat flap. As soon as waterpistols are in the shops again, I'll be buying a super soaker.
Posted by Jackie Wills at 8:31 am No comments: