Emily Dickinson and day of the dead

The students across the road have started celebrating and the dead won't mind.

Because I could not stop for Death –
He kindly stopped for me –
The Carriage held but just Ourselves –
And Immortality.

We slowly drove – He knew no haste
And I had put away
My labor and my leisure too,
For His Civility –

Or rather – He passed us –
The Dews drew quivering and chill –
For only Gossamer, my Gown –
My Tippet – only Tulle –

Since then – ‘tis Centuries – and yet
Feels shorter than the Day
I first surmised the Horses’ Heads
Were toward Eternity –
Posted by Jackie Wills at 7:40 pm

She started, "Given your size and your age…" she was saying something about my skirt.  By the end of the sentence I wouldn't have been able to repeat it, so it's impossible to quote it verbatim a few hours later. While I think it was meant to be a compliment, I was floored and that's rare.

I had to turn my back and laugh. Then I had to go outside and laugh. I am 60 and a size 12-14. No spring chicken, not skinny, but that phrase somehow seemed to amplify both.

I've been thinking about body image more than I would, as someone else I know has been repeatedly asking if I've lost weight and, also with kind intentions, pointed out that "now" I have a waist. It seems churlish to take these comments any other way, but it had me thinking, what the hell did she think of me before? Did I really have no waist? I thought a waist belonged to corsets and the 1950s. Wrong.

Before all this I woke up excited by the idea of building on an old poem I had printed up as a postcard (which allegedly found its way to the Woman's Hour noticeboard).

It's only a list of synonyms but perhaps its form makes what women are called a kind of game, lightens the intention. I could have done with a sniff at its humour later because although I was laughing, I was also hurt.

I looked at another I tried out at the same time - synonyms for prostitute. I thought I could make them into a sequence, although it is misleading to call either of them a poem. They are blocks of text. I don't know yet, I want to see what they could become. Maybe a collection of aprons or cat bowls.
Posted by Jackie Wills at 6:28 pm 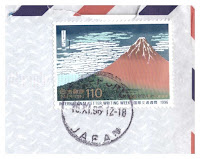 I have letters from my grandfather to my grandmother going back to 1917, although most of the bundle in my wooden box are from the 1970s. They describe friends' summer jobs, relationships, and a friend who was studying medicine asks me to bring back 200 Peter Stuyvesents. Later she consults the I-Ching for me.

They tail off in the eighties but I have letters from Marc in Connecticut and some in the 1990s from Amanda in Japan. When I scanned the corner of an envelope from her, I noticed the stamp commemorated International Letter Writing Week, 1996.

I may have others stashed away in odd places, but I'm sure many went in the bin or the fire. I've printed out emails, some from a good friend who died, but my inbox is largely 38 degrees urging me to sign another petition, reminders about meter reading, renewing my car insurance, and people selling stuff. The 'Social' tag on my gmail account invariably fools me. There are few personal, gripping and vivid messages.

My first poem based on a letter began with one I kept because I am ashamed I did nothing about it - it was an appeal for help I ignored. I went through the box and as I copied phrases into my notebook, looked at the handwriting, heard that person's voice, more came. The most prolific letter writer was a boyfriend who lived in Aberdeen while I was in Portsmouth. 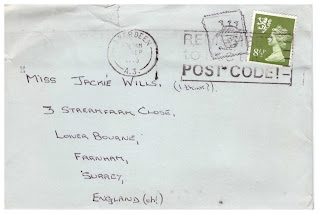 They are so full of travel, daily life, fun that I could fall in love with him properly now. I failed to keep that relationship going - perhaps it was distance. Another regular writer was Amanda in Japan. I am sure I haven't kept all of hers, but he writes vividly about her travels and new life away from England.

Mum kept some letters and odd pages I wrote home from France when I was 17, then at 21. At 17 I was working one summer at a chateau teaching  English, cleaning, taking the kids to the swimming pool and helping with the paying guests. My memory of at least one guest is totally different to the reality I describe.

At 21, I was struck by my casual "see you in two months" with no suggestion there'd be any more from me. I describe an island I camped on in great detail.

The letters and occasional card have prompted me to wonder about people I've forgotten, or who I rarely think about. From there, into memory and an idea I read about in the Guardian, of "dancing when we write".

Magma 63 is publishing one of the letters poems, another appeared in The Rialto 83. The first was published in Mslexia in September 2014.
Posted by Jackie Wills at 11:56 am