Horse racing with the Aldeburgh Eight

The first note in the little square book I used to record this year's Aldeburgh Poetry Festival is typical of Peter Sansom. It's allegedly a quote by Douglas Dunn: "I wish I'd known then what I still don't know."

I was with Peter all weekend at Aldburgh and the days that followed listening to Valerie Rouzeau, Choman Hardi, Jane Duran, Tony Hoagland, Kei Miller, Holly McNish and many more, listening to debate, favourite poems and craft talk.

The Douglas Dunn quote in my book is followed by a note about a TV cop series. One of the first things we talked about was River. Peter's attempts to understand why women would suspend disbelief for River became a running theme as we stood around with a cup of tea or discussed what exercises we'd be doing.

After a week together, you become more than a group. We inhabited the beautiful Bruisyard Hall as if it was ours. I slept in a four poster, got fatter on Maggie's meals. We admired the pheasants, heard the shots and spotted barn owls hunting in the unnaturally warm days.

Peter Sansom, with his wife Ann, devote their lives to nurturing new writing. They are The Poetry Business, with all its associated publications including The North, one of the UK's best magazines. They've launched many very successful poets including Moniza Alvi, Dalgit Nagra and Pascale Petit, not forgetting Simon Armitage.

Peter's gentle humour is often self-deprecating, rather like Michael Laskey, his fellow tutor on the Aldeburgh Eight since its conception.

It would have been impossible for me to undertake the week thinking I was stepping into Michael's shoes. The responsibility was enormous. The festival and this scheme have developed so organically that every element has almost gone beyond strategy and thought - things have been tried, borrowed from elsewhere, tested and altered until they work.

So I prepared myself by preparing far too much, by turning over poems and exercises in my mind and by muttering that famous final stanza of Yeats from the Circus Animals Desertion:

Those masterful images because complete
Grew in pure mind but out of what began?
A mound of refuse or the sweepings of a street,
Old kettles, old bottles, and a broken can,
Old iron, old bones, old rags, that raving slut
Who keeps the till. Now that my ladder's gone
I must lie down where all the ladders start
In the foul rag and bone shop of the heart.

Before the Aldeburgh Eight I'd had my fingers burned teaching a course in which a student's behaviour came alarmingly close to bullying and she had drawn another into her orbit. Luckily I got out unscathed but the person I was working for had no concept of support for his team of casually employed, hourly paid women.

Yesterday, when we'd waved the minibus off to Saxmundham station and another two off in the car, all with notebooks, laptops or iPads full of drafts, finished poems and more to come, books to read and writers to look up….Peter and I sat down with Naomi Jaffa (still helping out even though she's left!) and Dean Parkin to consider the week, how everyone (including us) was looked after, if there were hitches and how they could be resolved, what might have been done better, if there was fine-tuning still to do.

What the Poetry Trust does so well is show respect to writers.

And that is at the heart of its success. 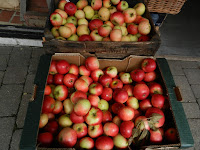 This deep seam of respect is informed by the experience of working writers.

And respect spreads because it also translates into high expectations. I felt it during the week working with the Aldeburgh Eight as they paid close attention to each other, rose to the challenge of exercises that often demanded big leaps of faith, that demanded they write fast and move on to something new without pausing for breath, that expected them to read raw, unprocessed lines straight from their notebooks.

But they did because when poems work they are as stunning as Fragility, Elpida Hadzi-Vasileva's work with pig caul fat (pictured above), as a box of Discovery. When they work, it is because they are created as carefully as the nests that wrens or robins make in my allotment shed each year. Each one of the Aldeburgh Eight had that respect for craft and words, for the work that has to go in to make a poem.

The last note in my book comes from an exercise of Peter's yesterday morning and I'm writing about the chattiness of plumbers. Infinitely kind, endlessly generous with his ideas and knowledge of poetry and poets, Peter Sansom's own work is infinitely well wrought and exciting to hear and his poems really should be more widely read. 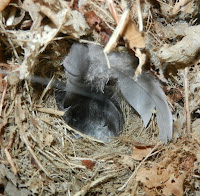 I'd hazard a bet that only Peter Sansom can turn a writing exercise based on a hippie-dippy card game associated with a fake Book of the Dead (found in Brighton incense-and-bells shop) into a poem about horse racing…..

He's also a poet who's unafraid to reveal his heart and that's true generosity. This is a trademark of his, along with gentle wisdom.

Read this recent poem, Sofa and here's another one, K563, from Anthony Wilson's blog.

The Swan Machine by Dean Parkin 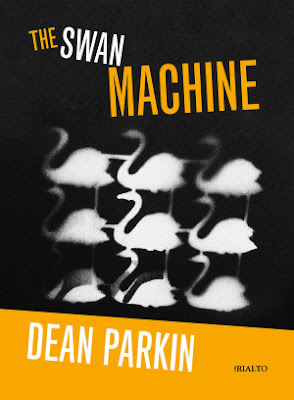 If proof was needed of the relationship between reading and writing, it's in a new collection of poems by Dean Parkin, which dropped through my letterbox a few moments ago.

Flicking through, I just keep finding lines that pause me with that "ooh, yes" feeling a good poem gives.

The Swan Machine's published by The Rialto and is dedicated to the two people he's worked with for years to deliver the annual Aldeburgh Poetry Festival: Michael Laskey and Naomi Jaffa. What a triumvirate of readers, immersing themselves in contemporary writing to bring new poets to the festival every year,  steeped in the words poets scratch out as they try to make sense of modern life, death and everything humans do to one another. Naomi and Michael have stepped down already and this year is Dean's last one too.

It's apt that the launch of The Swan Machine will be the first event - 4.15, Friday, Peter Pears Gallery, Aldeburgh.

When we were chatting recently, he told me this book has been put together over about 20 years. I marvel at that patience. But surely that is also what adds to the depth and quality of poems which jump out, even on a first read. As well as a well-matured seam of humour.

A small poem: 'Old Enough to Be Your Daughter' ends with the lines: "Me / with shirts suddenly older than her." Then there's the barber's comment in the poem, Hernia: "Should I leave this white hair/ with the others?"

I love a poem that makes me smile and know this is going to be a satisfying, original book, full of compassion and humanity. The book's been financed by subscription - a brilliant idea on The Rialto's part. On the website, the subscription method's described like this:

Originally created as a subscription publication which has a long and honourable history going back to the Seventeenth Century, and it is thought to have been invented to avoid dependence upon fickle patrons. We’re using this method to publish Dean’s book. All subscribers’ names have been listed in the book.

Praises from Thomas Lux, Helen Mort, Christopher Reid and Peter Sansom, and a launch at this year's Aldeburgh Festival…for once in the spotlight - Dean's poems.