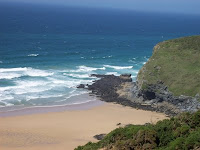 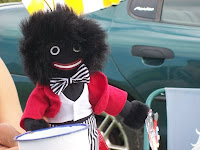 The two faces of Cornwall.

There'll be much chattering about English holidays after this summer of tightened purses and rain.

I've just returned from 10 days in a county I have fond childhood memories of, blue with cold from swimming and surfing, still transported by the smell of traditional, thick, vanilla ice-cream and the feel of turf on a cliff.

There weren't many sunny days on this holiday and perhaps too much time to reflect on the nature of English tourism. I was offended by the flags to St George, by the confederate flag, too, flying on our campsite, by the appearance of gollies in the campsite games room grab machine and an aggressive display of them in a Newquay shop window.

How much do you forgive when the coastline gives you so much to dream about?

Walking on the coastal path between Watergate Bay and Mawgan Porth, I chatted with my son about hell and what it might be like. He brought it up and I don't believe in an afterlife, but like him have always been intriqued by the nature of hell. Coincidentally, I'd taken Dante away with me and had just started it (CH Sisson's version). I showed him the diagram of Dante's levels of hell and read bits aloud as the rain pummelled on the tent one evening before he and the other three teens crossed the campsite field to the games room for the night. Yes, Dante was a hit.

But all of us felt uncomfortable with Cornwall's blatant absence of black people, with these gollies - relics of an England I was glad to see the back of when I left Surrey. We felt uncomfortable, too, walking on those tiny roads being buzzed and squeezed into fences and puddles by four wheel drives. I've never seen so many in one place. Everyone wears a wetsuit to go into the water. So much ostentatious wealth.

Last year, in Tintagel, my son saw a golly in a gift shop. He held forth, to an amused audience, about this discovery. The shop assistant didn't understand, or pretended not to, the point he was making.

And then there's the Cornish flag. So reminiscent of the Breton one. It flies among the St George's crosses, too, over the caravan parks and tented villages. Perhaps the golly's face superimposed in one of its corners?

But the kids want to go back next year! They made loads of friends, they hung around and gossiped, they stayed up late and sat at cafe tables, tried surfing and didn't get up till midday. My daughter even said she'd like to live in Cornwall. Its coastline, the deep blue of the sea on a good day, caves, clean sand and stunning coastal path that I wish I'd seen more of, all these elements energise the soul. The sea, of course, can take those gollies and reduce them to rags in no time. And all night, the sea's just fields away, so endlessly inventive.
Posted by Jackie Wills at 10:02 am No comments: