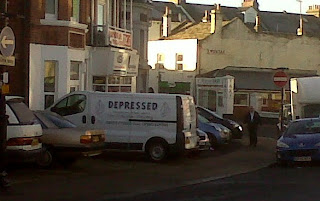 The year's worst week had passed by the time I saw this depressed van outside Worthing station. The far wall on a street corner shows the sun was out - all day, in fact. But during that trough that we name melancholy, misery, gloom, despondency, despair, desolation, doldrums, SAD, slump, decline, downturn, blues, hollow, standstill, dent, cavity, dip, pit, hole, trough, crater, basin and bowl, one Sunday, the sun came out.  Brighton rushed to the seafront to double the effect - sun reflected off chalk and sea at Rottingdean so we were in a light tunnel.
I made lists during those days of what I could do to feel better, wrote letters, sent packages I'd had on my desk for days. And standing in the London Road post office, all that was left when the Co-op closed, I wondered what it reminded me of. It was pre-revolution Romania.
This is the view to the right as you queue. The next most constructive use of the Co-op was DreamThinkSpeak's installation last May where the poverty of consumerism was spliced with brilliance of the Cherry Orchard.
I took the depressed van on my phone from a distance.  The linguistic brilliance isn't obvious because the business strapline is missing. It's an ironing service. 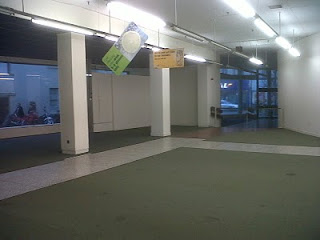 Posted by Jackie Wills at 9:23 am No comments:

Before John O'Donoghue wrote his magnificent Mind Book of the Year, Sectioned, he put together  The Beach Generation - word sketches of some of Brighton's resident poets.
Listing writers associated with a place is a minefield - so many passing through, so many perhaps in hiding, so many ignored. John's was a great idea but no-one has yet written the full story of Brighton's poetry and its poets. It could start in many places....
I've always thought of Bernadette Cremin as the Bard of London Road and its procession of the dispossessed.
Brendan Cleary has to be the Bard of the Gladstone and Bear Road, mourning lost lovers and charting a city's hallucinations.
In the absence of invitations to be a respectable visiting professor I've declared myself Bard of Lewes Road's funeral parlours, booze shops and hairdressers.
I'd vote Rob Hamberger and John McCullough Bards of the seafront and Kemp Town, Maria Jastrebska, Helen Oswald and Dave Swann, Bards of the exiled and allotments, Janet Sutherland and Lee Harwood, Bards of the places we'd sometimes rather be.
Ros Barber will always be the Bard of Embassy Court and Catherine Smith the Bard exploring what you half-see from the corner of your eye.
Catherine has nominated Tom Cunliffe Bard of Brighton Beach Huts and Rachel Rooney Bard of Preston Park and the Rotunda Cafe (one of my fave cafes in the city, actually...)
When I grew up in Farnham, the art school was the place we aspired to, although I was proud of William Cobbett for his sometimes harsh treatment of Surrey in Rural Rides. When I worked in Guildford I associated it with pop stars hiding in the villages, although it was home to Lewis Carroll and Aldous Huxley lived in neighbouring Godalming.
Brighton's associations are documented in diverse places but no-one's ever put cash up for comprehensive research on writers in Brighton.
A city should be proud of its writers and nurture them. Myriad's doing a great job of publishing novelists Sue Eckstein, Ed Siegle and Robert Dickinson  - and Waterloo's supporting local poets like Naomi Foyle, John McCullough, Maria Jastrebska, Dave Swann. John Davies keeps PigHog alive and is branching out into videos of writers reading their work. But where's the city's writers' centre, the old Sussex Arts Club, where there were events, a bar, a sense of mutual respect and support?
A South Coast sleaze tour of Brighton mafia would be a worthwhile endeavour too.
Posted by Jackie Wills at 10:43 am No comments: 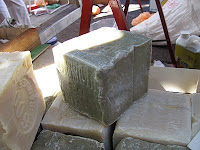 In 2011, I want the grey parrot back in my apple tree but I read in the Argus it's already been adopted. I want to buy a block of Savon de Marseille in the same market as last year - yes, in Marseille. I want my broad beans to survive mice. I want to grow celeriac successfully.

Posted by Jackie Wills at 10:12 am No comments: