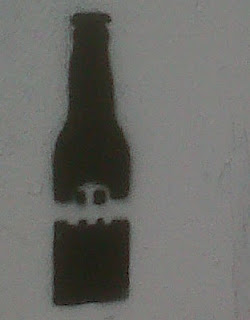 Lewes Road reminds me of Shakespeare's second best bed in its ranking as second most polluted road in Brighton.
Stuck for how to describe this jammed up, run down source of underage booze and fags, the council's opted for 'neighbourhood of knowledge'.

What student quarter (or increasingly, rich kids' playground)  means is off licences and takeaways, chalk invites on the pavement to Victoria's birthday, parties in conservatories, hammering on doors, public status updates at 4 am, no room on the morning bus, seagull-pecked bin bags.
When the big cars come cruising in September, it's the landlords checking their investments followed by mummy's 4x4. So many homes have been turned over to students round here Brighton and Hove council is starting to panic. Why? The dent in council council takings is showing.
Instructions for how to make a student house
You buy a 3 bedroom house with living room. You divide the big bedroom and living room. Now you have 6 bedrooms. You convert the attic. Now you have 8 bedrooms. You put a conservatory in the garden - that makes a living room. You charge each student £400 a month and your income is £38,400 a year. You don't have to register as a house in multiple occupation. You don't pay council tax.
Instructions for how to move in
Get so drunk you can't remember your address. Stagger to the neighbour's. Threaten the girl inside, hammer on her door until the police turn up. Speak with a posh accent. You're rich and white - they won't arrest you.

Posted by Jackie Wills at 10:29 am No comments:

Posted by Jackie Wills at 12:18 pm No comments:

Autumn is an executioner - a game involving tea and poems 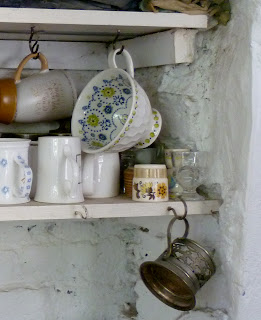 For Autumn is an executioner and her hour is darkness. She is a warrior and her element is metal. Ou-Yang Hsiu (1007-1072)
The quote comes from a piece called Autumn translated by Arthur Waley. It's in an old collection More Translations from the Chinese that I bought from someone who was selling off his dead mother's books piecemeal years ago. I go back to it often, as I go back to Michael Longley's poems, because it reminds me that simplicity is a good goal. It reassures me that poets whose work survives talk to me because their language is simple, their thoughts universal.
This leads me to a poem of Longley's called Snow Water, the title poem to his 2004 collection from Cape. It's in the first person and a request for 'a gift of snow water' as a 60th birthday present. Longley delights in tea names - Silver Needles and Cloud Mist - and the stories they contain. But there's far more to this poem - its life below the surface is thrilling and testament to Longley's erudition and playfulness.
When I was doing research for Whittard re-branding work, I often had his poem in mind. Then I came across a painting by Wang Shih-shen 'Asking for Snow Water' from 1740. The story of the painting is told by Alfreda Murck in a Record of the Art Museum (Vol. 37, No. 2, 1978). I'm quoting it at length in order to show the game Longley is playing within his poem and with it too, but which many readers are probably unaware of. Effectively, Longley puts himself in a tradition, a conversation, a match between poets continuing through time. What is also so fascinating and relevant to the observations Murck makes and the content of the poems she quotes is the way Longley himself writes about friends both living and dead. How he places himself in many of his poems within a tradition and how he constantly refers to those he admires - classical writers as well as more recent poets.
Murck observes..."Eleven literati embellished the painting with reflective poems and comments. The intertwined lives of these men and the evolution of the document make a fascinating story. For whom was the painting intended? Who is the figure and what is being carried? What prompted the numerous inscriptions? The story unfolds through the inscriptions. In the first, the artist makes a plea to his friend Chiao Wu-tou for water melted from snow. We learn that it was for Chiao that Wang painted 'Asking for Snow Water', that the figure is a young servant carrying a crock of water to Wang, and that the mist clouding the thatched house is steam billowing from Wang's tea brazier…..
"...Of the many painters benefiting from the cultural florescence in Yangchou at the time some exceptional talents emerged to be called the Eight Eccentrics of Yangchou. Wang was addicted to tea and plum blossom. it was his addiction to tea that prompted him to paint 'Asking for Snow Water'....His first inscription, written in eleven lines of varying length below the scene, gently hints that a gift of water would be welcomed:

"If I were to get teeth-chilling water gathered by a mountain household,
My cloud-covered pot would echo all night with its icy soul!"
Murck continues: "He sent the poem to his friend, who sent it back with the gift of snow water. Wang replied:
"As Master Wu-tou has kindly sent snow water,
I have composed another poem in thanks for his elegant gift..."
Murck describes how poems were added to the scroll over the years by others:
"When I was in humble circumstances, I met one who became both my lasting friend and teacher,
Clasping the frozen snow to his breast, he had the bearing of a wild crane;
Who would have thought his pure spirit would go to the grave?....."
And another....
"By paper windows in a bright bamboo hut
A table spotless without dust;
There is a carefree brewer of tea,
And the man who sent snow on a clear cold day;
Their deep friendship is as pure as the water...."

Wang Shih-shen's Asking for Snow Water, Tributes to a Tea Drinker. Alfreda Murck. Vol. 37. No 2. Record of the Art Museum, Princeton University © 1978
Posted by Jackie Wills at 10:27 am No comments: