Not writing for money 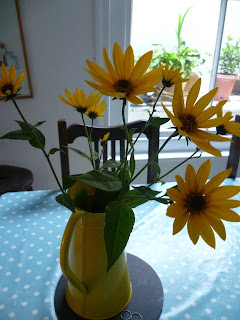 Trained as a journalist in my early 20s, I've always expected to be paid for what I write. Okay, when I began writing poetry more seriously I couldn't imagine that it could compare. But nevertheless, I still valued my time in £s. When I wasn't earning through journalism (and I have been freelance for all but seven and a half years of my working life) I was conscious of what I wasn't earning when I was trying to write poems.

Writers are polarised, it seems, about whether it's right to be paid to write. When I began earning money from running workshops or doing poetry residencies, I was able to cut back on the amount of journalism I did to keep my family housed and fed. Three times in my life I received grants to take time out of that constant struggle of looking after small children and being the wage earner. I was incredibly grateful for time to focus and think. Did what I produced meet 'objective' quality standards? I don't know. The grants were awarded to buy time to write.

A novelist friend once told me that she'd become aware of this privilege when she was travelling and meeting writers who fitted everything into their daily, working lives without the luxury of public subsidy. Yes, I know people who do that here. With public funding shrinking, it is the norm.

But what started me thinking about it again, apart from a thread on Facebook started by writer and publisher Charles Boyle, was arriving at the age when it is impossible to find paid work and wondering what I was going to do in the five years before collecting a pension. 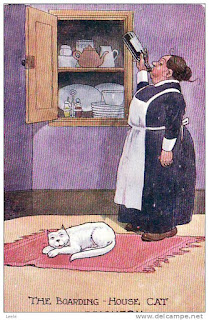 Since becoming a seaside landlady with Airbnb, I've found the distance it gives from my own expectations is a massive relief. For years I was judging myself by what I could earn from writing and whether or not I'd be in line for a residency, grant or workshop. I had periods when the pressure was off, with Royal Literary Fund fellowships and the reading round - temporary and part-time jobs designed for writers that also released me from some of the insecurity of freelancing.

But with the reading group ending in June and just one surviving job providing a very small income, I thought I was facing serious problems. Airbnb has liberated me from that worry and from my own ridiculous equation i.e. literary work means I am valued as a writer.

It no longer matters. Washing sheets, changing the bed and cleaning the loo makes me happy. If I have a piece of writing on the go, I can think about it. If I don't, it doesn't matter, I enjoy the shine of the sink. Writing has gone back to being something I do for the love of words. Work provides me with a succession of fascinating people. I thank god for the sea, pier, Royal Pavilion and a washing machine.
Posted by Jackie Wills at 4:05 pm

Talking to the blackbird mother 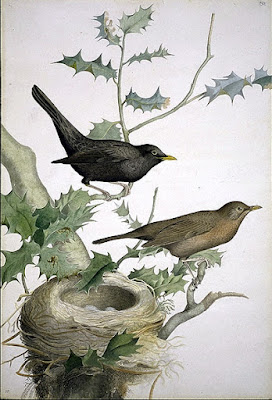 A week or so ago I realised there was a blackbird nest in my shed when I noticed the mother fly into a corner.

The shed has no door and when Jane and David re-roofed it last year we left a broken slat at the back because it's always got nests in. Once I found one in a carrier bag another in an old hard hat, both hanging from nails.

I was worried that the blackbird might desert the nest with me clanging around looking for tools and the gas stove I keep in a big metal trunk. So the first time I went in, knowing she was there high in the corner, instinct made me speak to her. I found myself saying, it's okay, I'm just getting some things, I won't hurt you.

The nest is well disguised and built over a rusting, disused frame for a garden hose. It's dark in the corner and impossible to see the nest from outside. My eyes have to adjust before I can make it out. But then, when she's sitting on it, her tail is up against the wall and she faces the door. I can just see her speckled throat.

She's absolutely silent but watchful. I have made an effort not to clang around too much and she is such a presence in the corner that I feel as if I'm almost genuflecting to her. Perhaps it's my Catholic upbringing.

There are millions of blackbirds in the UK and the sound of the blackbird is one of the most familiar, along with the robin and chattering sparrows. 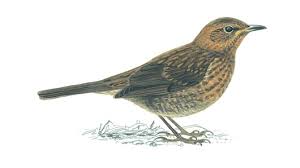 Jeffery Boswall, an expert on birdsong writes on the British Library website:

"The blackbird has been called the Beethoven among birds. The cock sings long, beautifully shaped phrases, well-defined in time and tone. The effect is mellow, flute-like and musical. Joseph Addison (1672-1719) wrote "I value my garden more for being full of blackbirds than of cherries, and very frankly give them fruit for their songs". 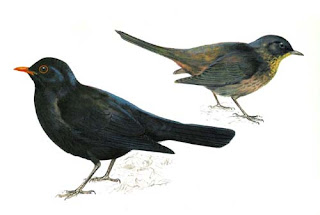 I have no idea if the blackbird mother understands anything when I talk to her, or even if she recognises the tone of my voice as unthreatening. She is, after all, not domesticated and not a mammal.

But something about the interdependence that I witness on the allotment, the birds' use of our sheds, the males following us when fledglings need feeding - their beaks alive with worms - makes me feel it is natural to talk to her.

Perhaps it's her silence, the shed changed once I knew she was there. She is one of the commonest birds, her song is one of the most familiar to me and here she is, demonstrating the cycle of survival - a cup-like nest made of straw and twigs, lined inside with mud and grass. She sits incubating the eggs for a couple of weeks. 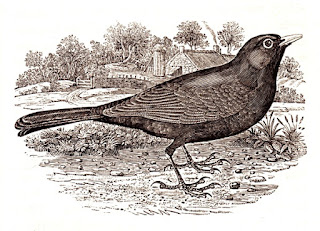 I don't think it's ridiculous to believe she might be conscious that I am not a threat. Her biggest predator is the cat once the fledglings are out of the eggs.

And perhaps I talk to her because it is also on the allotment where I've become more aware of the communication between species - the mobbing calls, the tic, tic alarm calls and frantic activity that happens when a cat appears, the birds tracking its progress for one another from canes, shed roofs and shrubs. Or perhaps I talk to her grateful for the language humans share with birds. According to the New Scientist, we share the same singing genes.

Coincidentally, Jeffery Boswall was born in Brighton and died in 2012….and this time last year saw the amazing show at Fabrica Gallery, Dawn Chorus by Marcus Coates. Often in my mind.
Posted by Jackie Wills at 9:41 am