Can I have a euro? 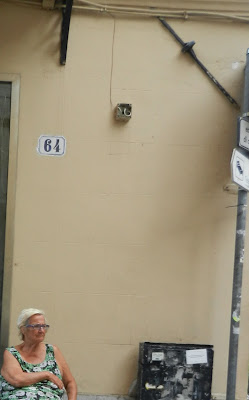 Perhaps I made eye-contact inadvertently as I was looking at the pattern on the woman's dress and admiring it. I was wondering if it would be rude to take a photo. I was sitting just opposite her at a cafe in Palermo with Giya, near the Teatro Massimo (famous for much, including Godfather 3.)
Anyway, she jumped out of her chair and came over to us, hand outstretched, asking for money to eat. All I wanted to do was relax so I refused and immediately regretted my bad mood.
She dismissed us with a great wave of her arm and after trying a couple of other people, wandered up to the counter at the cafe where they gave her a bun. Outside again, she began berating two Indian men selling mobile phone cases and umbrellas.
So I took this photo sneakily, her in the background, Giya in the foreground. I edited Giya out - it wasn't a flattering angle - and I do like the woman's dress very much.
I wonder if there is such a thing as a stress free holiday? What with still not knowing if the car hire company's going to slap charges onto my Barclaycard, lethal Sicilian roads and not speaking Italian, at times I found it hard to switch off.  I know from experience it takes a week to wind down and then the holiday proper begins, so I was perhaps just getting started when it was time to come back. Even on the beach I was staring at the horizon wondering if that distant fishing boat or yacht could be carrying refugees. 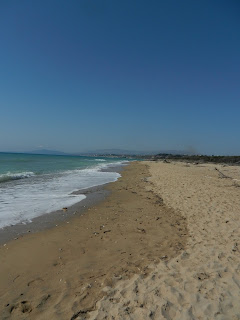 The beach itself (in the reserve, Foce del fiume Platani) was a dream at first sight, a short walk from the house near Borgo Bonsignore, through eucalyptus and pine woods, where lizards rustle out of the undergrowth every few steps and marsh harriers cruise overhead.
There were rarely more than 12 people on the beach, which stretched for kilometres from Capo Bianco (Eraclea Minoa) to Secca Grande.
It was punctuated with shelters made of driftwood and bamboo, with tree trunks washed up in storms, polystyrene boxes and litter. One day I watched a bird which didn't move for hours. The reserve is the first stop for migrating birds from Africa.
The sun was baking. The sea several shades of turquoise. It should have been relaxing.
But one day Giya's friend was followed through the woods and the man wouldn't go away.
Another day a man took his trunks off just yards from us, disappeared into a shack and came out again to stand at the shore showing us his erect penis. Shortly afterwards a second appeared on the other side of the girls (I was in the water), having walked the length of the beach, plonked himself down a few feet away, took off his trunks, stood up and started masturbating. 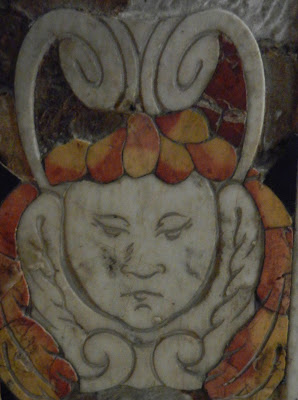 If I could have summoned a sea demon at the time, I would have, but circumstance metamorphosed me into a vision he really did not want to see and hear. I wished I spoke Italian but did my best in English.
I was a raging English tourist shouting from the sea as I stomped out of the water and up the beach, my hands on my hips or gesticulating.
At the time I would have wished on that man, for his arrogance and abusiveness, all the violence the sea was able to summon, the violence, even, of The Godfather. He got the message and after some mandatory shoulder shrugging and outstretched arms suggesting he didn't know what all the fuss was about, he slunk away. It is very likely my voice was heard for miles around.
Nevertheless, for three days running we were plagued. The beach deserted, the men walking up and down until they spotted us. It became impossible to contemplate going there alone, but I did and the penny dropped when a man young enough to be my son suggested I might want to take my costume off and join him for a nude swim. I'm 60 I was thinking. I thought I was immune.
"English women, very lovely," he said.
English women much too polite, I thought, wishing I'd memorised the kinds of insults I learned as a teenager. During our polite conversation I discovered he'd travelled 45 miles to this beach because it was "so free".  Clearly the place had a fearsome reputation that I'd missed in my pre-holiday google research. It is in fact, unofficially at least, a nudist beach at one end and popular with gay men. The woman who owned the house eventually 'discovered' these facts. Neither of these are the problem, of course…what she never owned up to was that the beach had a reputation as a place to get quick, casual sex.
However, after three days we earned a kind of force field around us in the form of a very distinguished, grey haired man, wearing the largest gold chain and crucifix I've ever seen other than around the neck of a priest or a rock star, smoking a cigar and carrying nothing but his towel and a man bag. Moving polystyrene beyond the tideline, saying it was bad for the fish, he sat next to us and we all smiled, again, politely. We lied about where we were staying. And the next day he was there again, a protector, who spent most of his time in and out of the water, saying how lovely it was until I mentioned his phone had been ringing and he was off. 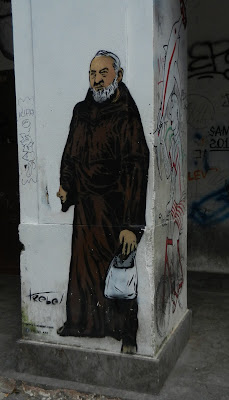 I hate the concept of being so defensive and rude on holiday that it's impossible to connect on any level.
In my stupidly liberal mind I turn over the issues of cultural difference etc. etc. But I kept coming back to the fact that the stereo masturbators would not have treated a Sicilian family in the way we were treated.
Or if they had, they would have felt the wrath of ages.
And the woman in the dress I admired did not approach anyone but tourists because I watched her as we sat outside the cafe in Palermo, just as I watched the hideous little mime artist who plagued everyone in the pizza restaurant the girls chose for our final night out.
The logical extension of this chain of thought of course is whether it is feasible, moral or defensible to be a tourist any more? As a tourist I have created the problems that I moan about.
So to switch off and relax becomes a pressure in itself. Instead all that matters is the new, a change of sensory experience.
And any form of travelling, no matter how superficial, does that. Here is some of my list: the decayed skeletons of the Capucin catacombs dressed in dusty suits and dirty lace, a black snake across my path, the swell and crash of waves all day and all night, cheese dotted with chilli, fresh peaches and aubergines, waiting for swifts in the evening as if they were new friends and the change in the crickets' song as it goes dark, cold water on my shoulders, dragonflies on the beach and thick, eucalyptus honey on bread in the morning.
The Valley of the Temples and the catacombs were the only major sightseeing we did apart from wandering around Palermo randomly. Oh, and the Sherbeth ice-cream festival where for 6 euro I had six ice-creams - two tubs and four cones: Madagascan chocolate from the best makers in Sicily (Cappello),  hazelnut, green pistachio (both Sicilian specialities), elderberry and lavender (superb combination, reminded me of home), a kind of butterscotch and the creamiest vanilla I've ever tasted.
In the hostel in Palermo's crumbling La Vucciria district, too, I heard Pink Floyd's Dark Side of the Moon played at full volume for the first time in decades and remembered the gig at Earl's Court when it was released - slipping on a wet floor and the smell of aniseed (Pernod) that seeped into my jeans. I will never hear one without smelling the other.
Posted by Jackie Wills at 9:07 am

Spiders are coming inside early


Part of my aim for this summer was to finish a first draft of the Venda Sun. Another was to crack on with some more poems based on old letters written to me and by my grandfather to my grandmother during WW1.

The letter poems feel exciting and I have been waking up thinking about them. In odd moments when I'm gardening or cleaning, I think about the next one. They run parallel to the poems I've been writing about age (coincidentally, the postman's just delivered the latest copy of The North with some of those age poems in).

I remember reading in an interview with Paul Muldoon that it's a good idea to keep writing at a distance for as long as possible. Well the summer's done that for me. A summer of change, a house full most of the time (wonderful), the allotment and cleaning.

I used to write every day. I might go back to that, but my pile of notebooks has barely changed. I have spent a lot of time wondering how people manage to produce dozens of books, what productivity actually means. I don't have an answer. I am envious of people who are driven but perhaps have always been too much of a grasshopper. I want time to make things other than with words. 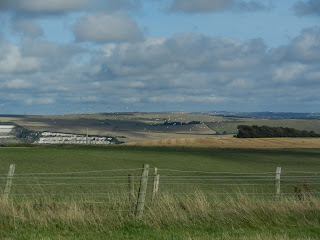 Anyway, The North - edited this time by Naomi Jaffa and Dean Parkin, marvels of the Aldeburgh Poetry Festival, Naomi now enjoying a much needed break from it. I've been nervous about these little, terse age poems, which remind me of the menopause ones, as if I hadn't quite finished with all that and of course, I haven't….thank god I am still alive and post-menopause facing the realities of being the woman with striped hair and a lined face.

Giya turns 21 on September 12 and that somehow marks a real turning point, more than being 60. Both her and Mrisi, then, will have passed that symbolic line into adulthood.

But other than all the change, there are constants like harvesting to do and trying to catch spiders to get them out of the window. Spider season's come early, autumn raspberries are just starting to ripen but they're taking their time because it's been so cold. They needed this recent sun but the heads are heavy with unripe fruit that may yet come to nothing if the temperatures drop again. The apples have done well. Even early in August, the Discoveries were fabulous.

My reading this summer - Agota Kristof, Charles Simic's translations of Vasko Popa, Sian Rees' biography of Lucie Aubrac, guidebooks on Sicily, short stories - Flannery O'Connor, Richard Wright, Elizabeth Jonsson, Jesse Stuart, Bessie Head and many more. Not so much poetry. Sometimes I need a break from it, but I'm looking forward to making my way through the 129 poems in The North by writers as varied as Sharon Olds, Thomas Lux, Linda France, Finuala Dowling, Alicia Stubbersfield, Stephen Knight, Helen Nelson and Paul Stephenson, to name just a few.