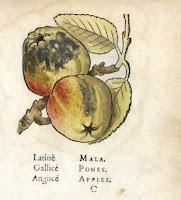 Wednesdays this month mean early starts and the M25 for two stops only. I'm running writing workshops at Wisley RHS Garden in Surrey for Daisyfest and the M25 is so unpredictable I allow myself an extra hour for the journey.

I stopped running writing workshops last year and declared to myself, friends, family that that was it. I was going to give away all the materials I've collected over 30 years but didn't quite get round to it.

And then a friend contacted me. Could I step in at the last minute? I'd be working in an orchard.

Yesterday I learned there's an apple tree called the Bloody Ploughman and that green woodpeckers forage on the ground for ants. They poke their long beaks into ant colonies, just as people poke termite mounds with sticks to retrieve grubs. An adult woodpecker was with a young one, feeding it. We watched through gaps in the rows of apple trees Wisley is preserving to maintain the diversity of species. 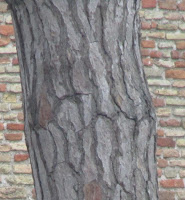 One of the young people in the morning workshop found the Bloody Ploughman being trained into an arch and couldn't stop repeating the name, he was so delighted with it. We stopped and read the label as we were doing a walk in the style of Hamish Fulton - counting steps, looking, observing, noting what we saw.

I had never heard of the Bloody Ploughman, being more used to apple names like Pippin, Jazz, Golden Delicious. The story behind its name is a gruesome reminder of class and the brutality of land ownership. I never knew woodpeckers foraged on the ground. I'd forgotten how much I love the ideas in Hamish Fulton's work and I think I'd forgotten how exciting it is to write a new poem.

Artist friend, Jane Fordham reminded me words are objects, suggested writing words on boards and doing tree rubbings, which went really well. We put boards up against the trees, we used tracing paper and graphite pencils to capture the bark.

For the afternoon, I went back to the work of two women poets, Alice Oswald - the new Oxford Professor of Poetry, who it transpires worked briefly at Wisley - and the brilliant poet and novelist Penelope Shuttle.

I read Oswald's poem, Fox, from Woods Etc which is a love poem to a vixen and I understand that, utterly. And I read Orchard Upstairs by Penny Shuttle for the love of imagined places and celebration of women. We made up new names for apples, we made up orchards in unlikely places, we watched crows, woodpeckers and pigeons beyond the pavilion where we were writing and later I wandered back to the car past fountains, water lilies and immaculate borders of colour.
Posted by Jackie Wills at 9:32 am