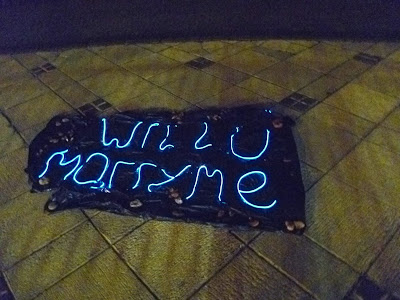 Fearful, because that's the habit of motherhood, I suggested maybe I could help?
Her task was to meet a man in a hotel in Brighton, to lay out his proposal in fairy lights and set a CD player going  with romantic music on the bandstand moments before he arrived with his girlfriend.
All that, without being spotted, arrested for loitering, the lights going out, or worse.
As my mother pointed out - she's the short story writer whose plot antennae are finely tuned - what if the girlfriend had seen them meet earlier?
My worries bobbed along in the plot of a gory crime thriller with the proposal a lure.
So yes, I did drive her down to the seafront and loitered myself. Actually I helped lay out his rather basic arrangement of lights on black bin bags and personally feel he could have stretched it a little more and added a 'y' and an 'o', as well as a question mark - after all it was a proposal.
As Giya set up the CD player and her camera - because she'd volunteered to take a sneaky distance shot of him on his knees proposing - I guarded the message.
I wouldn't have imagined quite so many passers by at that time of night, or so many dogs, who were the greatest risk of course, because any one of them might have decided to piss on his proposal.
It was sweet though, as I explained to total strangers about this plan that another total stranger had concocted with my daughter. Many of us shared an 'ah' moment and one couple who were completely taken with the idea actually strolled back later to see if they could spot him.
Giya, meanwhile, was waiting for the text telling her to start the music and trying to keep tourists away - two were very determined to stake their claim, but were persuaded to leave when she explained her dilemma.
The future husband, very kindly, had given Giya her £20 for the job upfront, so he was taking a risk too. But it went off smoothly, the girl cried, Giya caught the moment on screen and they walked away arm in arm.
Posted by Jackie Wills at 1:22 PM