My neighbour's little springer has been wary of the council flock of sheep ever since she was a puppy and first saw them. Of course, they aren't totally free when they graze the slopes of Whitehawk - there's an electric fence. The now grown dog associates the sheep's baaing with that pain in her nose, the jolt backwards into brambles, and yesterday wouldn't go within a hundred yards of them. So I slogged up the steepest bit of the walk, masochistically, and she ambled up a much gentler incline. The sheep are a peripatetic curiosity - have even made an appearance at one of the local secondary schools - and at one point several of my friends were tempted to apply for the urban shepherd job advertised in the local paper. But Whitehawk's exposed - the wind comes straight off the sea and while it's still a great place to meander in autumn, by January it's a bitterly cold ridge. The compensation, in winter, is the clear blue frosty skies and the sort of display I caught yesterday, when the sun was forced through gaps in the cloud cover onto the sea. 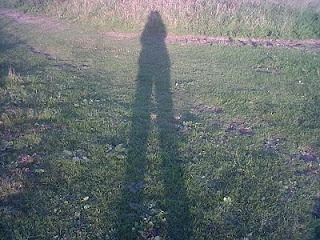 Often up on the ridge with the golfers to my left and sea in front, I imagine myself a long way from Brighton. Whitehawk is a causewayed enclosure, a camp older than Stonehenge and one of a dozen in England although there's nothing to tell us dog walkers, wanderers or even the travellers who stop here every summer, about its history. Several ancient burials have been found here - it was apparently a place people gathered for big events and rituals. Now they gather for racing and bank holiday markets. There used to be a souped up car meeting at the racecourse and sometimes there are wedding fairs. In the summer, travellers left a small boat beached on the turf. Down towards the tip you can sometimes smell methane from the pipes sunk into the earth. And on hot days you can take a path and find tents in a circle among the brambles.
Posted by Jackie Wills at 12:26 PM