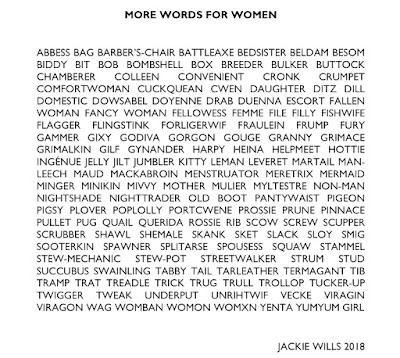 When I began researching synonyms for 'woman' it was around about the time the historical thesaurus had gone online and the sheer number of words used to describe me and my sex was mindblowing. I gathered a few together, not all of them, and put them in a list. I wanted them to be a poem but they weren't going to be in the lyrical tradition.

I've always been interested in how words are displayed. It comes from the old days of journalism when design was a craft, typesetters were deities and we worshipped at the altar of the font and ems.

I stretched the words, squashed them, Jane Fordham and I made a book with them and eventually I  put them on a postcard. The first Words for Women was published in Binders Full of Women, sent to a rude US politician a while back. In its second manifestation it was this card. In its third manifestation it was in Woman's Head as Jug, set not in landscape but portrait.

This design was pragmatic. I wanted cheap as chips postcards and I played around on one of those postcard sites until the words fitted.

But every time I showed it to someone people would say, what about....?

And then the unbelievable - the word woman itself came under attack. As if we haven't had enough thrown our way. I've heard some shockers. More words for women emerged. 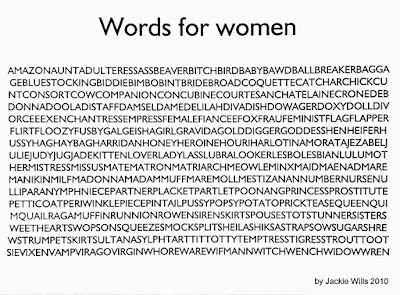