My first collection was shortlisted for the 1995 T.S. Eliot prize. Like most first collections, it represents many years work and the more recent poems in it were written in grabbed moments between looking after two very young children. My son was born in 1992, my daughter in 1994, so this collection feels sometimes like a third child. I remember my excitement when Arc agreed to take it on and later meeting David Morley, Arc's UK editor, in Brighton to talk about it.

At the T.S. Eliot party, I met Mark Doty (who won it that year) and Michael Longley who is one of the poets I most admire. When the book was launched in Huddersfield, I read with Elizabeth Jennings, a prolific poet and lyrical master. Black Slingbacks comes from my first publication - a pamphlet produced by John Harvey of Slow Dancer Press. John is the brilliant creator of  Charlie Resnick, a crime writer, dramatist and poet. 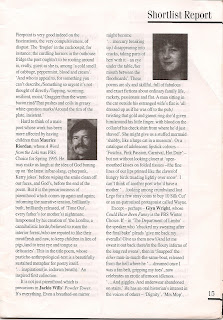 On the 18th floor, looking over miles of estates,
I thought I could see hills with trees on.
As if the edge of a city was that easy to define.
At night, it's like every picture you've ever seen
of skyscrapers. If I'd been there longer,
perhaps I'd be able to name
thos three blocks together, the long cliffs
by Elephant and Castle. But I never smelled
chocolate from the biscuit factory,
vinegar from Sarsons, which Carolyn said
rose sweet and sour on the wind
with the sound of trains.
One night I tried my key in the door
but it was locked from inside
and when you opened, like a gaoler,
I saw the shoes. "I've got a friend here, I'm sorry."
You didn't think I"d be back.
The date's in my cheque book.
£7, taxi, the 24th.

Coming back is easy.
We can paddle the estuary
we waded chest high, clothes over our heads
to reach the dunes
see an occasional camel train.
Here freshwater turtles
die sparkling in salt,
herons fish with gulls.
Storms smashed the bridge
leaving only half a road.

It's getting dark.
Hassam and Mark climb
a ruined gunpowder tower
swapping languages - a pound
of oranges, the word for fig.
Listening to them struggle
I watch the horizon redden
as if I'm witnessing a battle
and the broken turret's arsenal
is exploding over the sea.

After stooping through a tunnel washed smooth by floods
our guide switches off the lights and we stand
still as stalagmites trying to guess where he is
from the strength of his sweet, beery breath telling us,
as if he's engineered it himself, there'll never be a crack
of sun or moon in here - where each winter three rivers
once collided and tons of water were forced upwards,
pummelling a ceiling more intricate than any stately home's.
Above, near the entrance, the ropemakers
lived - twisting and plaiting - and after rain or thaws,
had no need of ears, just mouthed and lipread
above the roar, their faces yellow in the candle flames,
paled by daylight only a few hours a week.

The old Anglia can't take it and my parents' plans for driving
through the night give out with the engine in a sheet of rain.
By fluke my father finds a garage, a removals van
filling up, so we're lifted, floppy with tiredness,
into the back to lie on blankets in the dark. No signposts,
no blinding headlights for my father to swear at
when they won't dip, no orange glare at each new town -
just that rattle of a toolbox and roll down door.
They could be taking us anywhere.
My mother promises tomorrow she'll pick us cherries.
My brothers whisper themselves to sleep, but I know
why the ropemakers avoided that hole in the back
of their cave, so opaque, immune to wax and matches -
it could draw you in by accident,
commanding silence while skin slowly covered your eyes.

The label says it's a mermaid.
There's always someone outside the shop,
looking. It's a local sight
this Victorian glass case next to a lawnmower
and worn cutlery. Small, shrivelled,
the head is hardly a woman's, more like a dog,
although the body's that of a fish.

It was a sailor's once. Perhaps he bought it
wanting to believe there were women
of a kind at sea, craving something new
to take home. When he died,
his things were sold in a lot to the pawnshop -
the only one left in North End
and still doing good business.

Close up, it's shabby., like a large cats in museums
with worn skins and whose eyes, though plastic or glass,
seem confused by stillness.
Just as a sailor would miss the sea
when he grew too old
and all that was left was to walk by the funair,
watch the hovercraft take off, it's skirt flapping,
or go to a pub on the dock
where the landlord kept whippets
with eyes brown as his mermaid's.

Susan wants to attach scythes to the wheels
of her father's car and cut everyone off at the knees,
like Boadicea. She could flatten a town centre
as quickly as a combine harvester. She's referee
when I fight with Donna over a ruler; snapped,
beating a cage of locusts so they would try to escape.
As we smash each other against lockers, Susan counts.

Every thud on metal is a point. Outside the art room
she throttles me for losing and my throat stings with vomit
as an indigested pea is forced from my nostril.
When I jump on her head in the swimming pool
her gushing nose leaves a trail on the white tiles like steak
dripping inside our fridge. But we make peace in needlework,
sewing skirts short enough to be cut from remnants.

They will flap against our buttocks like shirt-tails
when we meet on Saturday in the Army and Navy cafe,
wrists smudged with lipstick - Fuscia, Pink Passion,
Carnival, Hot Date. We put them on in the toilet mirror,
practising open-mouthed kisses on folded tissues -
the fine lines of our lips printed like the claws
of hungry birds treading lightly over snow.

Tomorrow you'll sit in your room
and outside only litter will be moving.
You'll wander corridors of closed doors
and go to the cinema where you'll watch
the screen burst or flicker - hearing but most of the time
not understanding. You'll wish you could meet people
in cafes, at traffic lights, the way you do at home.
But you have just minutes to make yourself understood
before heads turn away.

And if you find a lover there'll be a time
when you hand her a book and ask her to read aloud,
because you need her to speak your language;
translating as she mispronounces words she's never heard.
And if you like her, maybe you'll wonder
how long you'll have to witness
the sounds of your country broken up
like this - all those pauses in the wrong place.