WOMAN'S HEAD AS JUG is a title given to me by artist Jane Fordham. Here are poems published in magazines between 2006 and 2013 when it was published. Only 'Willow' does not appear in the collection.


There is more background on this collection and where the poems came from here: http://womansheadasjug.blogspot.co.uk

The sea boiled with mackerel
inches from the shore -

The shoal had followed her
across a firing range,

through a fossil forest
and an arch broken by tides.

It came from another element,
a darker, granite coast, hard with snow,

ran her into a stone quarry,
an attic room tasting of almonds.

that turned silver and still. A boat slowed
its engine. Everything was changed.

She’s in that old light again,
inventing sleep without sirens,
the first blackbird cutting through the blinds.

Hunters, mushroom gatherers,
woodsmen pass by the door
to a thrush’s trio of notes.

She hears the robin
summon water from rock,
the wagtail raise islands with its wings.

Days without sun -
hail splits the seam
between June and December.

Her heart opens its sluice gates.
Her lungs gulp hurricanes.
A wren fills the forest where nothing else sings.

She stares into a fire
willing sparks to make a bridge
between earth and sky.

Night senses the hollows she’s slept in.
If she’s still
it will eat from her hand.

She asks the gale to deliver
a gorse yellow slope, call seals
into a bay, bring her a boat.

In the space an axe makes,
the tree’s retina, charcoal heart,
she smells blackcurrants.

The forest sings to her
of cures,
of its flutes, auricles, air-roots.

She’s listening for orchids,
asking the sun to return a footprint
forgotten on a rock.

The forest sings to her of a headland,
the crunch of a boat
on gravel, a path wrapped into night.

She has been a hermit, a schooner,
a logger’s blaze, the Cloud Forest,
both kelp and rowan - the famine tree.

There’s salt in her throat,
a gossip of crows,
a tray full of smoke.

Beneath the sapling are turquoise clay pits,
an Assyrian priest
his fish head, his glinting cloak.

In the centre of the forest
a dark star spits webs, ant runs,
honeycomb.

She’ll return the shadows she made
to the sea. Only waves
can do anything useful with them.

In the groves and their silences,
trees capture each second
a clock sheds.

The forest sings to her
of abandoned altars,
of its scaled and feathered beginning. 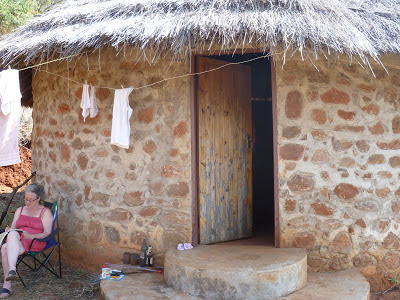 Woman’s head as jug
(after a title by Jane Fordham)

Today she pours the Water of Life – green
walnuts picked in June, beaten with a pestle.

She steeps pounds of rue for Plague Water,
and to clear ‘mists and clouds of the head’

infuses peacock dung and bruised millipedes
in spirit of lavender. Bending over a bowl

she might empty a reservoir, reveal the valley it invaded.
Her head is fired from the same earth.

This blue and white fragment shows a willow
to match the trees at Pett Level, looming over a swamp

and rope swing. Nearly eighteen years ago I sat in its shadow,
pregnant with you. The sound it made in the night

felt like hands on my belly. It caught smoke from the fire,
gangled over a field of swans, hummocks and hawthorn,

a rickety bridge. It surfaced as I jabbed a fork into earth,
weeding. The fragment is smaller than my palm

but the willow’s blue as my veins and yours, stretching
to the neck of an absent vase, the years playing in its branches.

Published in The Dark Horse

On Friday nights the cycle lane disappears
beneath a line of waiting cars outside Wine Me Up,
Booze Factor and Perfect Pizza. Men criss-cross
the pavement with padded bags and cool boxes.
You can always buy a beer on Lewes Road.
And when the cycle lane appears again, the cyclist
looks towards the gyratory. She knows the gyratory
has its own rules, governed by a stranded pub
and petrol station. Not even Sainsbury’s has influence –
customers backed up into the car park, refused entry.
More than a crossroads, cars meet from six directions,
split off into seven lanes - left to Five Ways, Lewes,
up the hill of death, into a dead end or round again -
to town, to town, to town. On the gyratory, the cyclist
tenses her arms, looks straight ahead. The rope
she balances both tyres on is held between poles
by enormous carabinas. She must ignore the 49b
revving behind her, the Big Yellow breathing out
chip fumes, the concrete mixer, silver van.
She cannot think of herself as flesh on the gyratory,
where the cycle lane no longer exists. She must be as sure
as time that it will reappear just after Shabitat,
the second hand superstore. She must be as sure
as faith, as the AtoZ or a 24 hour delivery man.

Published in The Echo Room